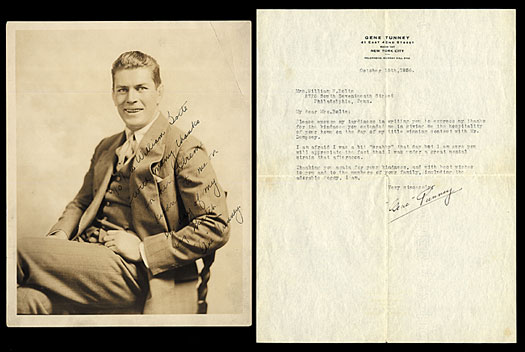 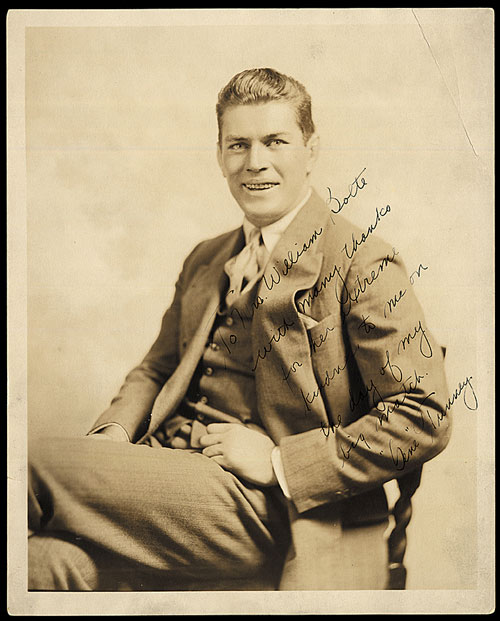 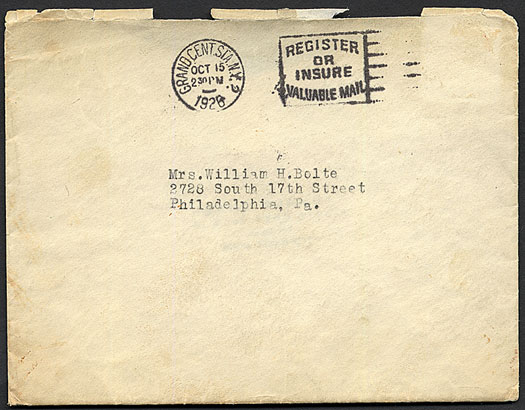 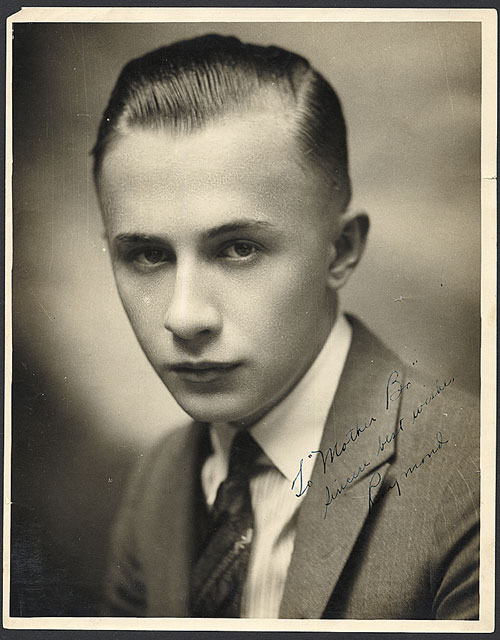 Extraordinary Gene Tunney signed photo and letter, both relating to his first title fight with Jack Dempsey in 1926. Over the years much has been written about former heavyweight boxing champion Gene Tunney, especially with regard to his two epic battles with Jack Dempsey. However, one fact concerning Tunney's first title fight with Dempsey, which took place in Philadelphia on September 23, 1926, has never been recorded and has remained a secret for the past eight-six years. Until now! Presented here, within this collection of letters, newspaper clippings, and signed photos, the never-before-told story about Gene Tunney's whereabouts on the day of the fight is revealed for the first time. In the weeks preceding the fight Tunney, who was the challenger, trained for the title bout at a country club in Stroudsburg. As the excitement for the bout escalated, so did the crowds. On the last day of camp an overflow mob of over 7,000 fans showed up to watch Tunney's final workout. Worried that Tunney would be besieged by both the press and fans when he traveled to Philadelphia the next day for the evening bout, his handlers, Ray Campbell in particular, came up with an idea. Changing his travel plans at the last minute, Tunney flew into Philadelphia instead of arriving by train and was then whisked away to an undisclosed location so that he could rest up for the fight. That undisclosed location, which has never before been revealed, was the home of Mr. and Mrs. William H. Bolte, who resided at 2728 South Seventeen Street. Mrs. Bolte was extremely close friends with Ray Campbell's mother and the family agreed to take Tunney in for the day, under a vow of silence, so that he could rest in preparation for the fight. Evidence of the Bolte's kindness that day is offered here in the form of two extraordinary Gene Tunney signed items, a photo and a letter, written to Mrs. Bolte thanking her for her hospitality. Incredibly, the photo appears to have been signed by Tunney on the very day of the fight. The photo (8 x 10 inches), which pictures Tunney posing in street clothes, has been boldly inscribed in black fountain pen (grading "9") "To Mrs. William Bolte/with many thanks/for her extreme/kindness to me on/the day of my/big match/'Gene' Tunney." In the one-page typed letter, dated October 15, 1926, on Tunney's personal letterhead, Tunney offers his formal thanks. In full: "My dear Mrs. Bolte: Please excuse my tardiness in writing you to express my thanks for the kindness you extended me in giving me the hospitality of your home on the day of my title winning contest with Mr. Dempsey. I am afraid I was a bit 'crabby' that day but I am sure you will appreciate the fact that I was under a great mental strain that afternoon. Thanking you again for your kindness, and with best wishes to you and to the members of your family, including the adorable Peggy, I am, Very Sincerely 'Gene' Tunney." Tunney's signature has been flawlessly scripted in black fountain pen, grading "10." Accompanied by the original mailing envelope. Both the photo and the letter, as well as the additional material in this collection, originate directly from the great granddaughter of Mrs. William Bolte, who has provided an extremely detailed five-page handwritten letter, chronicling the events of that day and the relationship between her grandmother and the family of Ray Campbell. One of the most interesting facts mentioned in the letter is that she met our consignor at one of the cross-country tour stops made famous by the stars of the reality show Pawn Stars . She brought the items not to sell, but just in the hopes that someone would appreciate the story. Obviously, our consignor did and a deal was later made. Ray Campbell, who was a sportswriter by trade (for The Cleveland News ), was a good friend of Tunney's and served as his secretary in camp. Unfortunately, their friendship was short lived, as Campbell died in 1929 as a result of pneumonia. An accompanying newspaper clipping reporting on Campbell's death notes that "a huge blanket of roses, 8 feet by 6 feet, was draped across the casket. It was ordered by Gene Tunney, former heavyweight champion of the world, and his erstwhile manager, Billy Gibson. Campbell was associated with Tunney as secretary for a short time and the former heavyweight champion was his close friend." Included with the Tunney-signed photo and letter are: a photo (8 x 10 inches) of Campbell, inscribed by him in blue fountain pen (grading "9") to Mrs. Bolte, that reads "To 'Mother Bo'/sincere best wishes/Raymond"; a collection of nine vintage telegrams, sent on the day of the fight, from various individuals and/or organizations wishing Tunney good luck in the bout (most are from American Legion posts - Tunney was an ex-Marine); and a number of vintage newspaper clippings related to the fight and/or Campbell. The Tunney photo, which bears a vintage "Wide World Studio" proprietary stamp on the reverse, has a heavy three-inch diagonal crease in the upper right corner, as well as a tiny edge tear; it is otherwise in Excellent condition. The letter (8.5 x 11 inches) has normal horizontal and vertical mailing folds, as well as a few tiny, light spots of age toning, and is otherwise in Excellent condition overall. LOA from James Spence/JSA. Reserve $300. Estimate (open). SOLD FOR $533