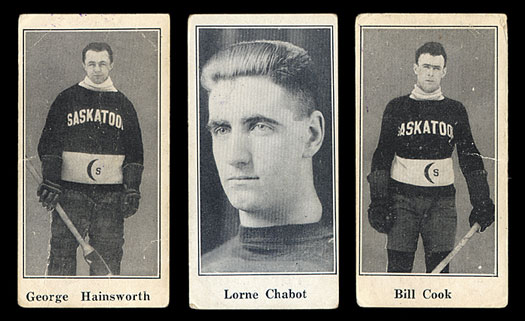 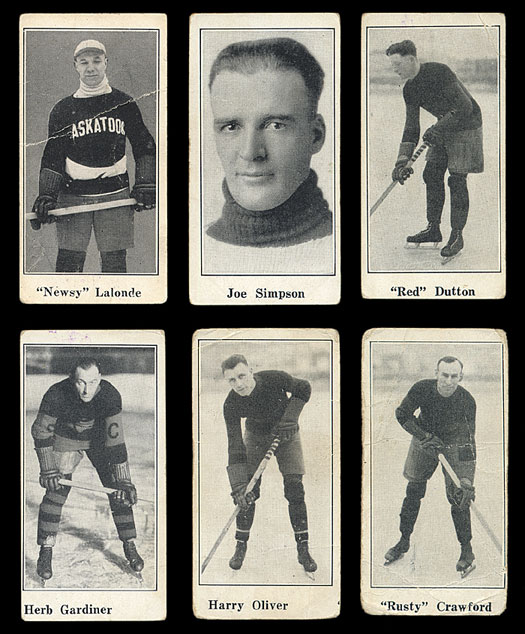 Offered is a complete set of seventy cards from the 1923-1924 V128 Paulin's Candy series, one of the premier hockey sets of the 1920s, featuring stars of the day from the Western Canadian Hockey League. Each card (1-3/8 x 2-3/4 inches) features a black-and-white image of a player with the player's name printed in black along the bottom. According to the backs, a complete set of 70 cards could be redeemed by mail for "one quality hockey stick and your collection of pictures." This set was redeemed. All of these cards have been canceled by the card company with a purple ink stamp on the back so that the same card could not be used a second time to redeem for another valuable prize. The grades listed below are without reference to the ink stamp on the backs. Keys: #15 Chabot (Vg-Ex), 35 Cook (Vg), 38 Lalonde (Gd), 39 Hainsworth (Vg), 41 Simpson (Vg), 62 Dutton (Gd-Vg), 63 Gardiner (Vg-Ex), 69 Oliver (Gd), and 70 Crawford (Fr). The balance of the cards grade as follows: 80% range from Vg to Vg-Ex, and 20% lesser. This extraordinary set has been locked away for decades in the collection of one of the hobby's great pioneer collectors (who passed away in 2009) and is being offered directly by his family. This is the first complete set of this rare issue we have ever seen. The 1923-1924 V128 Paulin's Candy Canadian hockey is among the rarest and most significant of all early Canadian hockey card sets. Total: 70 cards. Reserve $1,000. Estimate (open).
SOLD FOR $3,555