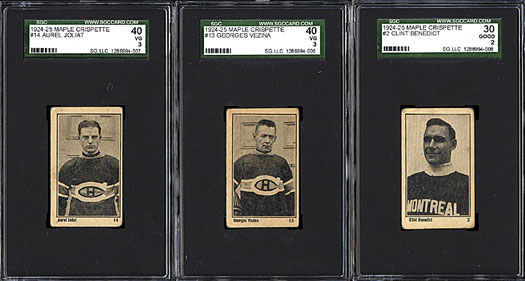 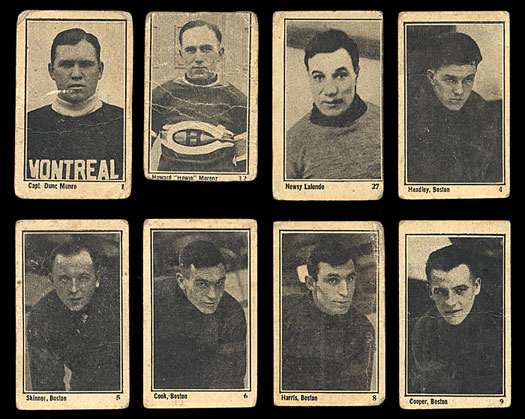 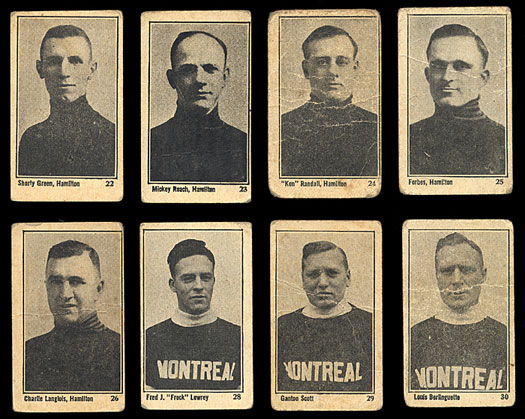 Rarely offered near-complete set of 1924-1925 V130 Maple Crispette Hockey consisting of 27 of the 30 cards comprising this rare Canadian candy issue, highlighted by Howie Morenz, Georges Vezina, Aurel Joliat, and "Newsy" Lalonde. Missing only #3 Fowler, 7 Harris, and 15 Cleghorn (a virtually impossible rarity in the V130 set) for completion. Twelve cards grade Vg, eight are Gd, and seven are lesser. We have selected three cards to be graded by SGC. Keys: #1 Munro RC (Fr), 2 Benedict (GOOD 30), 12 Morenz (trimmed, otherwise Pr), 13 Vezina (VG 40), 14 Joliat (VG 40), and 27 Lalonde (Gd). As detailed on the back of each card, a complete set of thirty cards could be redeemed by mail for a pair of skates. As Maple Crispettes did with its baseball series, the company short-printed one card (#15 Cleghorn in the hockey series; #15 Stengel in the baseball series) to limit its exposure to that prize redemption offer and possibly to encourage sales. This rare near-complete set has been locked away for decades in the collection of one of the hobby's great pioneer collectors (who passed away in 2009) and is being offered directly by his family. This is the first near set of this rare issue we have ever offered. Total of 27 of the 30 cards (representing what is essentially a complete set minus two cards, not counting Cleghorn) of this extremely rare issue which includes some of the most difficult-to-find cards of many great Hall of Famers, including Howie Morenz, Georges Vezina, and Aurel Joliat. Total: 27 cards. Reserve $500. Estimate $1,000++. SOLD FOR $2,963