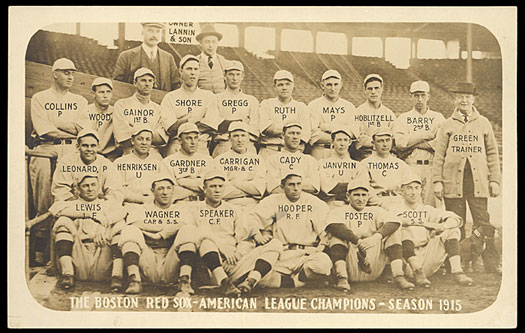 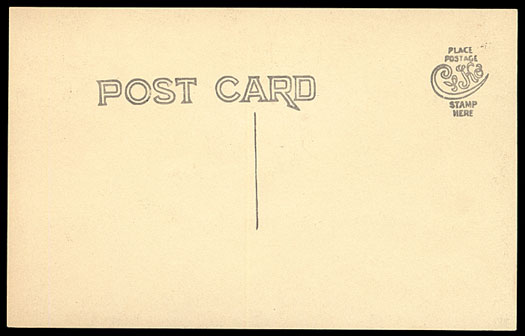 Presented is an extraordinary newly discovered example of one of the great treasures of all Babe Ruth cards and all baseball postcards: the classic "American League Champions" 1915 real-photo postcard of the Boston Red Sox dating from Babe Ruth's rookie season. The postcard pictures the Boston Red Sox in a posed team photo, including Babe Ruth, who is seen standing in the back row. Each member of the club is identified in print atop his image. "The Boston Red Sox - American League Champions - Season 1915" appears in white letters below. This postcard has long been recognized as one of the premier baseball postcards in the collecting world, as well as representing one of the very few cards which can truly lay claim to being Babe Ruth's rookie card. In addition to its great rarity, this may be the very first card featuring Babe Ruth with the Boston Red Sox in the Major Leagues. (The traditional M101-4/5 card of Ruth dates from 1916.) This particular 1915 Red Sox postcard is especially noteworthy for its remarkable state of preservation. This is the finest example of this postcard that we have ever seen, and while there are very few examples to compare it to (we believe fewer than ten), we believe that only the Copeland example (Lot 732 in the famous 1991 Sotheby's auction, selling at that time for $6,050) can compare to this extraordinary example. This card was part of a small collection of baseball items (comprised of ten postcards and a 1912 World Series program) that have long been family keepsakes and were personally saved at the time of issue by a member of our consignor's Boston-area family. The card (5.5 x 3.5 inches) has never been addressed or mailed, and the only noticeable flaws are two extremely tiny areas of minute surface wear along the lower left corner/border and a very tiny blemish touching upon Harry Hooper's image. The photograph displays perfect clarity and contrast. In exceptional Excellent to Mint condition overall. Because the card describes the Red Sox as "American League Champions" and not World Champions, logic dictates that it was issued just prior to the 1915 World Series between the Red Sox and Phillies. That assumption is supported by a previous example of this postcard that we handled (Lot 227 in REA's April 2007 auction; sold for $9,400) that was postmarked October 12th, which was the date of Game 4 of the 1915 World Series. Although Ruth won eighteen games for the Red Sox during the regular season, his role in the 1915 â€œfall classicâ€ was limited to a single pinch-hit assignment in the ninth inning of Game One (he grounded out). This is an outstanding newly discovered high-grade example of this extremely significant rarity commemorating Ruth's rookie season. Reserve $2,500. Estimate (open). SOLD FOR $21,330