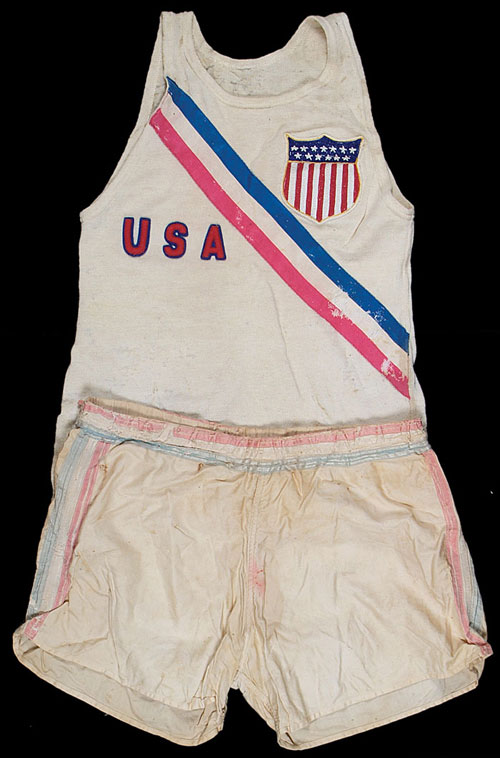 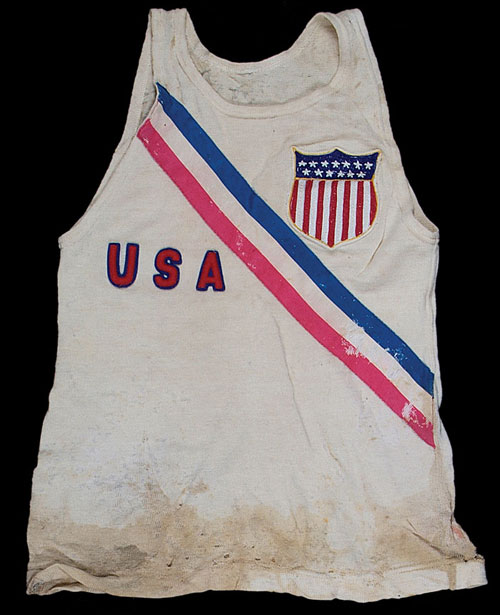 In 1934, the United States track team conducted an extended overseas tour, competing in various European venues, as well as a Japan. This collection is comprised of a number of exceedingly rare items from the Japanese leg of that celebrated tour. 1) Original 1934 U.S. track tour uniform (jersey and shorts). The jersey features an American Flag patch on the left breast, a red, white, and blue "sash" patch running diagonally across the front of the jersey, and the letters "USA," appliquÃ©d in red on blue felt, on the right breast. No manufacturer's label, or any other tagging is present. The matching white shorts display red, white, and blue piping around the waist and down the sides of each leg. A "Spalding" label appears in the waistband. Both the jersey and pants display excessive wear, including fading to the material, numerous tears, soiling, and heavy staining. 2) US Track Team felt pennant. The white pennant, trimmed in red and blue, features an American Flag shield patch and reads "Touring Japan/United States/Track Team." All lettering is appliquÃ©d in blue felt. A "Taiikudo" manufacturer's label appears on the reverse. 30 inches in length. One of the blue tassels is missing and the other is almost completely torn. Both white tassels are intact. Tack holes are evident at the corners and the tip. A few small tears affect the main body and lettering. Vg-Ex. 3) Collection of ten original photos capturing the team at various locales during the tour. One of the photos captures Ralph Metcalfe (wearing his Marquette warmup suit) in a procession with other teammates down a street in Japan. Metcalfe was known as the world's fastest man before relinquishing the title to Jesse Owens two years later at the 1936 Summer Olympics (Metcalfe finished second to Owens in the 100m race). Six of the photos measure 8 x 10 inches, while the other four measure 6.5 x 4.5 inches (or slightly smaller). Ex-Mt condition overall. We have never seen another example of the track uniform or pennant offered here and they are most likely the only survivors from the 1934 tour. Total: 12 items (uniform, pennant, and ten photos). Reserve $200. Estimate (open). SOLD FOR $1,422