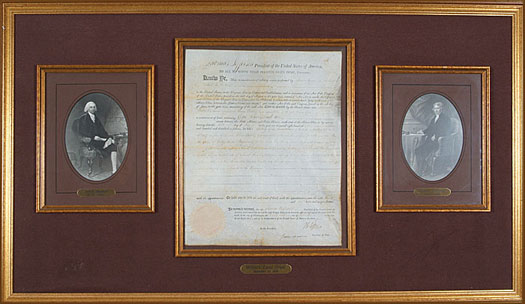 Official United States land grant, dated September 26, 1806, signed by Thomas Jefferson (1743-1826), third President of the United States, and James Madison (1751-1836), fourth President of the United States. The document, which is both printed and handwritten, grants to Frances Eppes (a Lieutenant Colonel for the war) "a certain tract of land, containing one thousand acres situate between the Little Miami and Sciota Rivers, north-west of the River Ohio." It has been signed in black ink by Thomas Jefferson, as President, and by James Madison, as Secretary of State. Both signatures contrast beautifully against the light-colored surface of the document, with the Jefferson signature grading "8" and the Madison signature grading "8/9." The document (12.5 x 15 inches) displays one vertical and five horizontal folds, a few areas of moderate toning (mainly along the fold lines), and a number of minor surface blemishes. The official paper seal of the United States (faded) remains firmly affixed in the lower left corner. In Very Good condition overall. The document has been mounted (most likely by a form of adhesive) and matted together with two small engravings picturing Jefferson and Madison, respectively. Ideal for display. Beautifully framed. Total dimensions: 42 x 24.5 inches. LOA from James Spence/JSA. Reserve $500. Estimate $2,000+.