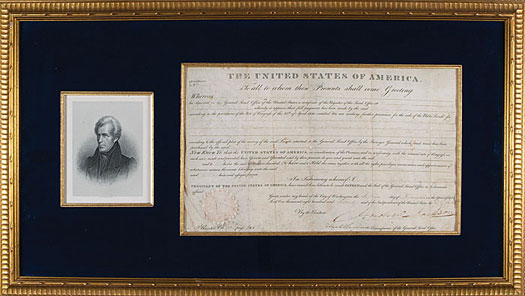 Original 1830 land grant signed by Andrew Jackson (1767-1845), seventh President of the United States (1829-1837). The official government document grants a parcel of land to Robert Ramsey of Indiana, according to the provisions provided by an 1820 Act of Congress. The document, which is both printed and handwritten on parchment, is dated November 15, 1830, and has been officially signed in black ink along the bottom by both President "Andrew Jackson" and the Commissioner of the General Land Office, "Elijah Heyward." It should be noted that nearly all of the handwritten notations are very light, with some having faded beyond legibility. However, the Jackson signature, which is exceptionally large, measuring a full seven inches in length, remains clear and distinct, grading "7." The official government seal, which is badly faded, remains affixed in the lower left corner. The document (15 x 9 inches) displays both horizontal and vertical fold lines, light toning, a few small tears along the intersections of the folds, light foxing, and a number of tiny, scattered stains, and minor creasing, most noticeably in the lower left corner. Despite the flaws, which are fairly common for a document of this age, the piece still presents extremely well and is perfect for display, especially given the size of the Jackson signature. Presidential signatures dating from the president's respective term in office, especially on official government documents, are always the ideal and this remains a fine example from "Old Hickory's" second year in office. Matted and framed together with a small engraving of Jackson to total dimensions of 29.5 x 16.5 inches. LOA from James Spence/JSA. Reserve $200. Estimate $500+. SOLD FOR $3,259