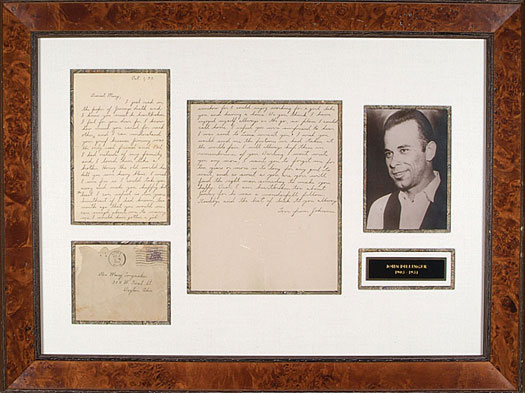 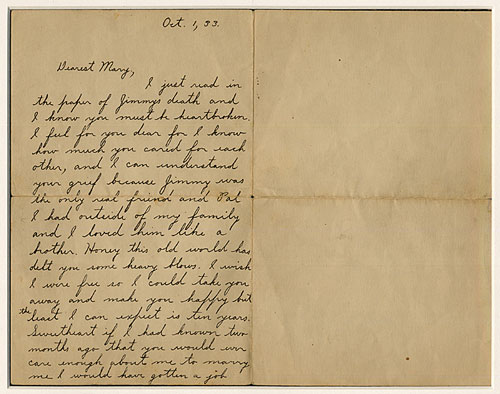 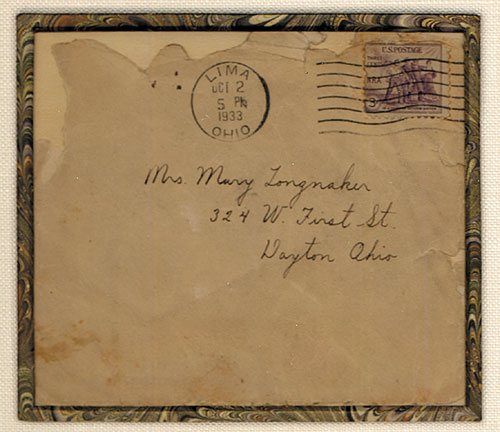 Extraordinary 1933 John Dillinger Two-Page Handwritten Love Letter from Prison - "Do you think I have enjoyed myself always on the go, no place

Two-page handwritten letter (on two sides of a unlined fold-over sheet), dated October 1, 1933, signed by John Dillinger (1903-1934), American bank robber and the FBI's first "Public Enemy #1." John Dillinger signatures are exceedingly rare, with probably fewer than ten examples known. Dillinger letters are rarer still, and we cannot recall having ever seen another. In this amazing letter, written by Dillinger to Mary Longmaker while he was serving time in the Lima, Ohio, jail for bank robbery, he expresses his true feelings for her and wishes he had chosen a different career path. In full:

I just read in the paper of Jimmys death and I know you must be heartbroken. I feel for you dear for I know how much you cared for each other, and I can understand your grief because Jimmy was the only real friend and pal I had outside of my family and I loved him like a brother. Honey this old world has delt [sic] you some heavy blows. I wish I were free so I could take you away and make you happy but the least I can expect is ten years. Sweetheart if I had known two months ago that you would ever care enough about me to marry me I would have gotten a job somehow for I could enjoy working for a girl like you and having a home. Do you think I have enjoyed myself always on the go, no place I could call home. I expect you were surprised to hear I was sent to Lima weren't you? I wish you would send me the pictures we had taken at the worlds fair. I will always keep them in remembrance of you. Darling I won't write you any more, I want you to forget me for ten years or more is to long for any girl to wait, and as sweet as you are you will find the right man someday to make you happy. Dear I am heartbroken too about Jimmy for he was a wonderful fellow. Goodbye and the best of luck to you always. Love from Johnnie.

Both the text and signature have been scripted in black fountain pen and grade "9/10" overall. The letter is accompanied by its original mailing envelope, postmarked "Lima Ohio - 5 PM Oct 12 1933," and addressed (in Dillinger's hand) to "Mrs. Mary Longmaker/324 W. First St./Dayton Ohio."

Mary Longmaker was the sister of Jim Jenkins, who was a former prison mate of Dillinger in 1929 at the Michigan City penitentiary in Indiana. It was there that Dillinger also first met Harry Pierpont and Homer Van Meter, both of whom became bank-robbing mentors to Dillinger in prison and who would also be part of his bank-robbing gang later on. During their incarceration together, Jenkins often talked to Dillinger about his twenty-three-year-old sister and how beautiful she was. Even though she was married and had kids, it wasn't a happy relationship and she was planning a divorce. Dillinger became so infatuated with her that he resolved to meet her as soon as he got out. After his parole in May 1933, Dillinger, armed with the information he learned in prison, began robbing banks so that he could raise enough money to bribe the guards and bust his pals out of jail. He also made a point of looking up Jenkin's sister Mary. The two dated and Dillinger fell in love. He even offered to pay for her divorce. Mary, however, remained noncommittal, knowing what kind of man Dillinger was. By that time, Dillinger's penchant for daring bank robberies had made him one of America's top fugitives and the police were closing in on him. Ironically, after he made enough money to bribe the guards and planned the escape of Pierpont, Jenkins, and Van Meter, Dillinger himself was caught, largely due to his romance with Mary. The police had discovered his clandestine relationship and instructed Mary's landlady to call them the next time Dillinger showed up, which she did. On September 22, 1933, the police arrested Dillinger, while four days later, the plan Dillinger put in place to bust his friends out went off perfectly, and all three men gained their freedom. (Mary's brother, Jim Jenkins, was killed shortly after by a posse enlisted to capture the three escaped convicts.) Pierpont and Van Meter eventually returned the favor and broke Dillinger out of prison on October 12th, but it was during his brief period of incarceration at the Lima jail, while he waited for his friends to come to his aid, that he penned the offered letter to Mary. Following his escape from prison, Dillinger and his gang embarked on on the most infamous robbery sprees in history, leading to his being named the FBI's first "Public Enemy #1." Dillinger eventually met his Waterloo at Chicago's Biograph Theater on July 22, 1934, where he was gunned down and killed by the FBI, thereby bringing to an end one of the most notorious chapters in the annals of American crime.

The letter (7.5 x 9.75 inches, unfolded) displays normal fold lines (the ends and intersections of which exhibit some slight tearing) as well as some minor creasing. In Very Good to Excellent condition. The envelope (5 x 4 inches) is incomplete, with just the front remaining (displaying the address, postmark and original mailing stamp). Poor condition. The letter and envelope have been matted and framed together with a recent print of Dillinger and a reduced-size photo copy of the front page of the letter so that it can be read in its entirety. Also, Plexiglas covers both the front and back of the piece, so that the actual letter can be viewed on both sides if so desired. Total dimensions: 27.5 x 21 inches. LOA from James Spence/JSA. Reserve $2,000. Estimate $4,000++. SOLD FOR $5,333