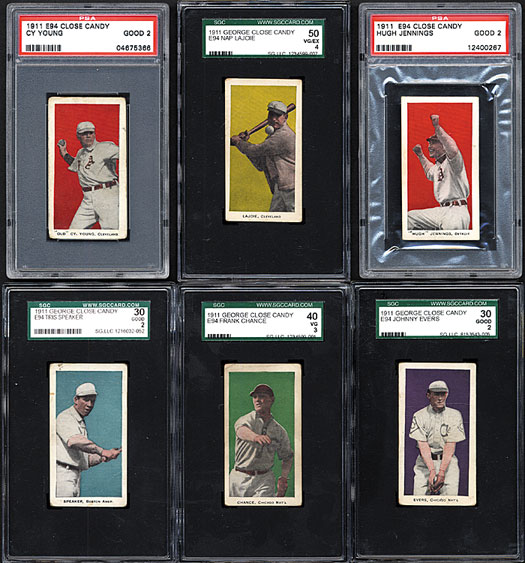 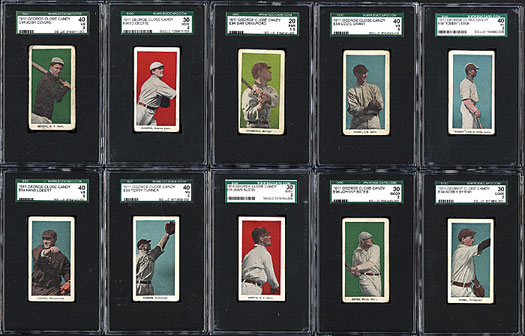 Exceptionally rare near-complete set of E94 George Close Candy consists of twenty-six of the thirty cards in the set, highlighted by eight Hall of Famers, as well as future "Black Sox" star Ed Ciccote. Missing only the following four cards for completion: Cobb, Dougherty, McGraw, and Wagner. Each card has been graded and encapsulated by SGC (except five PSA). This 30-card set was issued in 1911 by the George Close Co. of Cambridge, Mass. Advanced collectors of "E" cards will immediately recognize the caramel-card set designated as "E94" as a thorn in their side. While at a glance E94s may be easily confused with other caramel-card sets of the era (E93 and E98 specifically), they are an entirely different set, even though they use many of the same subjects and poses. Of the three previously mentioned sets, E94s are the most difficult. The E94 caramel-card set is usually associated with the George Close Co. of Cambridge, Mass. While the majority of the E94 cards do not have any sort of advertisement on the back, some have been found with overprints that make reference to this company. The set is comprised almost exclusively of Hall of Famers and stars. SGC grading composite: One VG/EX 50: Nap Lajoie (HOF). Nine VG 40: Frank Chance (HOF), Devlin (PSA VG 3), Devore, Grant, Leach, Lobert, Magee (PSA VG 3), Murray (PSA VG 3), and Turner. Ten GOOD 30: Austin, Bates, Byrne, Ed Cicotte (Black Sox), Davis, Johnny Evers (HOF), Hugh Jennings (HOF, PSA GOOD 2), Lake, Tris Speaker (HOF), and Cy Young (HOF, PSA GOOD 2). Five FAIR 20: Bescher, Sam Crawford, Kleinow, Lord, and Moore. One POOR 10: Doolan. These cards are in very pleasing but circulated condition. This is typical for caramel cards, which of course were issued with candy, one card per pack, and which tend to survive in lesser condition than their more common tobacco-card counterparts. The equivalent SMR value for the group is $9,090. Total: 26 cards. Reserve $2,500. Estimate $5,000+. SOLD FOR $14,220