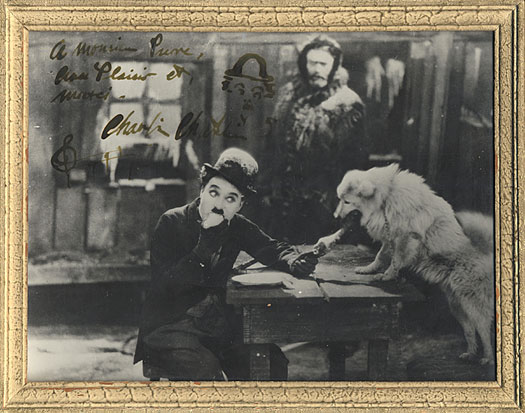 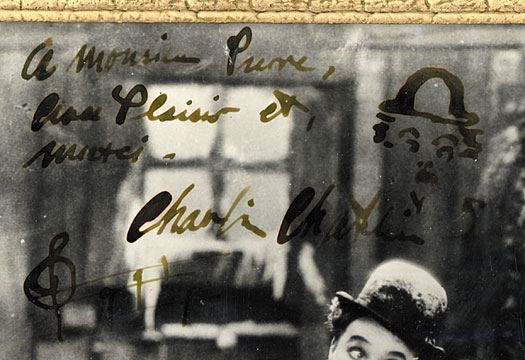 Publicity still from the 1925 film The Gold Rush , signed in black fountain pen by Charlie Chaplin (1889-1977). This is one of the finest Charlie Chaplin signed photos we have ever seen, let alone handled. What sets this photo apart from all other Chaplin signed photos is Chaplin's inclusion of a small portrait sketch of his "Little Tramp" character, complete with bowler hat and mustache. Chaplin has inscribed the photo in French, "A Monsieur Pierre, avec Plaisir et, merci" (To Mr. Pierre, with pleasure, thank you), below which he has signed his name. To the left of the inscription is the sketch of the "Little Tramp," and beneath his signature Chaplin has drawn a short bar of music. Both the inscription and text are boldly scripted, grading "8" overall. Although this is a vintage photo, it might possibly date to a rerelease of the film in either the 1930s or 1940s. The photo (8 x 10 inches) displays a few extremely minor surface wrinkles (most of which can only be seen when viewed at certain angles) and is in apparent Excellent to Mint condition. It remains housed in its original wood frame, which is backed with French biblical text. Total dimensions: 11.75 x 9.25 inches. LOA from James Spence/JSA. Reserve $500. Estimate $1,000++. SOLD FOR $2,015