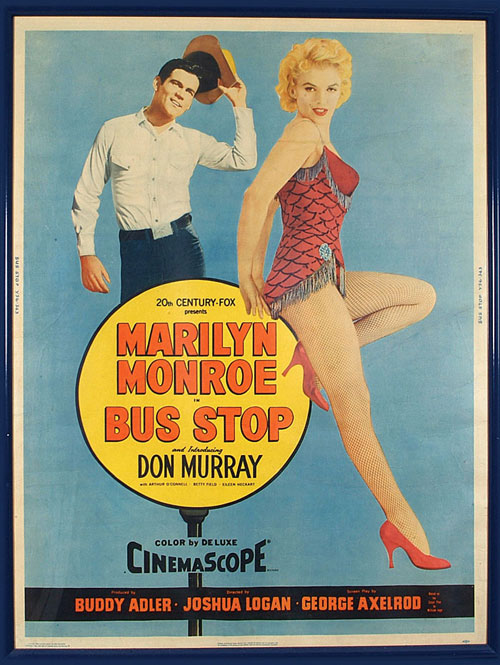 Rare 30 x 40-inch movie poster for the 1956 Twentieth Century Fox release Bus Stop , starring Marilyn Monroe. This seldom-seen poster, which is one of two different styles issued in this size, features, by far, the sexier image of Monroe in comparison to the other art issued for the film and as such it is all the more highly prized by collectors. This is the only example we have ever seen of this 30 x 40-inch poster and it might arguably be the best movie-poster image of Monroe ever issued. The photo pictures Monroe dressed in red corset and fishnet stockings as she strikes a seductive pose. Although her physical attributes were certainly a big reason for her box-office success, Bus Stop was the first film in which she received rave reviews for her acting ability. In one of the most notable reviews of the film, New York Times critic Bosley Crowther began his article by writing "HOLD onto your chairs, everybody, and get set for a rattling surprise. Marilyn Monroe has finally proved herself an actress in 'Bus Stop.' She and the picture are swell!" It should be noted that 30 x 40-inch movie posters were printed on a heavier stock than one sheets and for that reason were almost never folded when issued, but instead were rolled. However, when rolled, the heavier stock tended to crease and, as a result, nearly all 30 x 40-inch posters in the hobby today display numerous tiny creases. The offered poster, which is linen backed, is no exception and has numerous light-to-moderate creases throughout, as well as some light scuffs and abrasions. A few tack holes and tiny tears in the border areas have been ameliorated by the backing process. While technically in Very Good condition, the poster displays at a much higher level and represents one of the most memorable movie-poster images of Monroe ever issued. Framed to total dimensions of 32.5 x 42 inches. Reserve $500. Estimate $2,000+. SOLD FOR $1,659