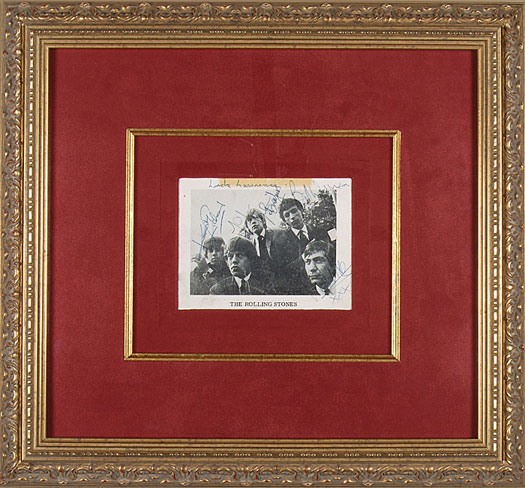 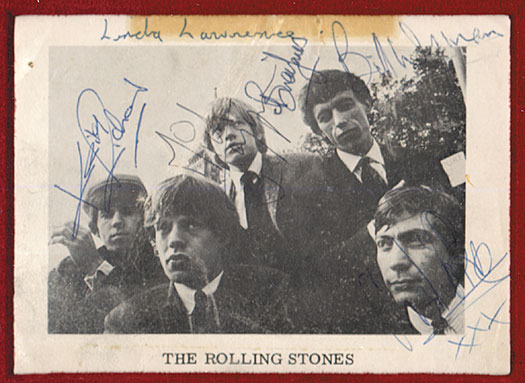 Extremely early Rolling Stones advertising card issued by Decca Records in promotion of the group's first two singles: Come On and I Wanna Be Your Man . The front of the card pictures all five original band members, each of whom has signed it in blue ink either atop or next to his respective image: Mick Jagger (black ink), Keith Richards, Brian Jones, Charlie Watts, and Billy Wyman. All of the signatures are boldly scripted and grade "9" or "10." The name of the person for whom this card was presumably signed ("Linda Lawrence") is written in blue ink across the top border. The back of the card bears the printed text: "THE ROLLING STONES' LATEST DECCA RELEASES/'Come On/ 'I Wanna Be Loved' - Decca F11675/'I Wanna Be Your Man'/ 'Stoned' - Decca F11764/WATCH OUT FOR THE ROLLING STONES/NEW E. P. - OUT BEFORE CHRISTMAS." While this is both an exceptionally early and rare Rolling Stones signed piece, it is also noteworthy for the inclusion of Jones' signature. Jones, who was the original leader of the group, left the band in 1969 and died shortly afterwards, resulting in the rarity of his signature today. Come On was the first single ever released by The Rolling Stones and it debuted on June 7, 1963. The band's second single, I Wanna Be Your Man , was released by Decca on November 1, 1963. Given that information, plus the fact that the card mentions that the Rolling Stones' next recording will be issued before Christmas, conclusively dates this card to November/December 1963. While promotional cards such as this were standard in the music industry at the time, The Rolling Stones had already made a name for themselves by late 1963. On April 16, 1964, Decca released the band's first album, The Rolling Stones , which sold over 10,000 copies on its first day of release. The album eventually rose to number one on the British charts and helped make the group an international success. Today, The Rolling Stones are considered to be one of the greatest and most influential groups of all time and remain as popular as ever. This is only the second signed example of this rare promotional card we have ever seen, and the first that we have handled. The fact that it includes the signatures of all five original members, and promotes the band's first two singles, makes it a particularly desirable and historically significant early Rolling Stones signed item. The card (5.5 x 4.5 inches) displays a number of light-to-moderate creases throughout, two tack holes in the white border areas, and small band of what appears to be adhesive residue running along the top border. In Very Good condition overall. LOA from James Spence/JSA. Reserve $200. Estimate $400/$800. SOLD FOR $1,778