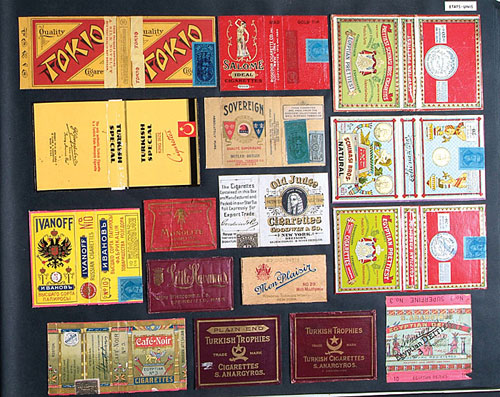 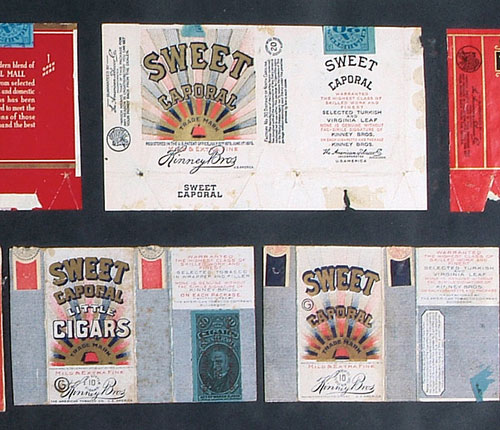 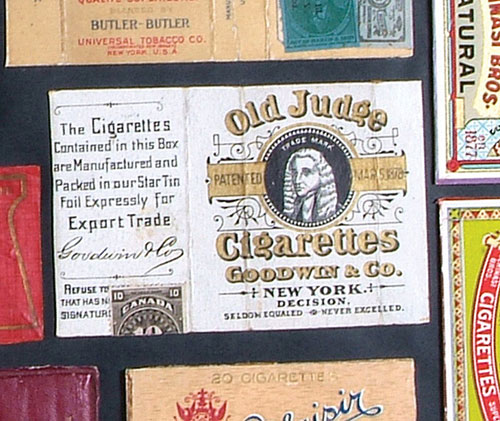 This enormous collection of cigarette packages from around the world is comprised of a total of 2,302 packs, representing seventy different countries, each of which is housed within one of three different hardbound albums (each measuring 23 x 16.75 inches). The packages displayed within these pages appear to date from the late 1800s to the 1980s, with many packages represented more than once. The three albums in which the collection is housed are of French origin, as evidenced by the stampings on each cover that read "La Cigarette Autour Du Globe." How the collection was assembled, and who assembled it, is unknown to us, but obviously a tremendous amount of time and effort was long ago invested in its assembly. The albums are broken down by geographical location. The largest album, and the one that has the most interest for baseball hobbyists, is dedicated to cigarette packages from North America. A second album features cigarette packages from Europe (thirty different countries; 924 total packs), while the third displays packs from Central America, the Caribbean, South America, Africa, and Asia (thirty-eight different countries; 341 packs). The North American album displays 622 Canadian packs and 415 packs from the United States. Packs represented within the United States section, many more than once, include Old Judge, Helmar, Hassan, Murad, Sovereign, Sweet Caporal, Sovereign, Home Run Cigarettes, Piedmont, and Fatima. This is a remarkable and fascinating collection of cigarette packages, and the largest offering we have ever seen. In the old days of organized collecting, a number of collectors assembled collections of tobacco packages in this manner. This was no doubt an advanced collection even among the most serious collectors of tobacco packages. All of the packages are completely affixed to the album pages by means of adhesive, and all have been completely unfolded and/or broken down so that they lay completely flat. Aside from that, the vast majority of the packages remain in Excellent condition overall. The three oversized albums weigh a total of fifty-six pounds! Total: 2,302 packages in three large hardbound albums. Reserve $1,000. Estimate (open). SOLD FOR $14,220