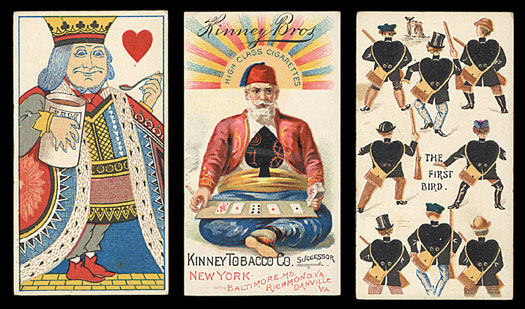 Near-complete set of forty-nine N219 Kinney "Harlequin Cardsâ€ (Series 1) cards. Missing just three cards (the ten of clubs, jack of diamonds, and six of hearts) for completion. Extremely attractive set of these very rare and colorful nonsport tobacco cards, with condition ranging from Vg-Ex to Ex (with a few slightly lesser). Issued with Kinney's Cigarettes, the set is entitled "Harlequin Cards.â€ Each card features a colorful and amusing comic-inspired drawing, with a brief title, that is uniquely designed as a playing card. The back of each card features a checklist for the set. This is an extremely attractive set. It is also a particularly rare nineteenth-century tobacco issue, almost never seen or offered as a set. In fact, this is the first set (minus three cards) that we can ever recall offering. Kinney's "Harlequin Cardsâ€ are one of the more unusual and rarely seen issues of the era, and were a favorite of the old-time collector who provided us with this set (as well as the other nineteenth-century nonsport tobacco sets offered in this auction). Total: 49 cards. Reserve $300. Estimate $500+.
SOLD FOR $948