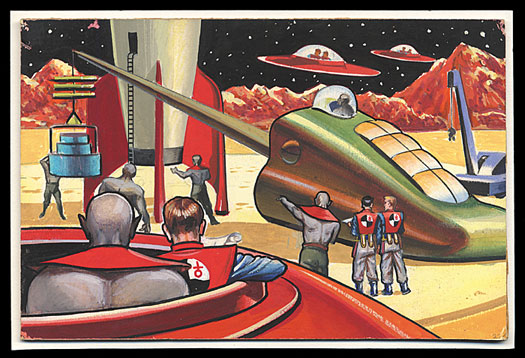 1951 Bowman "Jets, Rockets, Spacemen" original watercolor painting used to produce card #23 entitled "Rocket Repair and Formula Q," featuring the "Mercurian marshmen" repairing the astronaut's rocket ship. Bowman's "Jets, Rockets, Spacemen" is one of the most significant early science-fiction sets, foreshadowing the many great advances in science and technology, such as space travel, which ironically would come to be just a few short years in the future. Bright, clean, crisp, and with astounding detail. The artwork includes additional image area which was cropped out by Bowman on the issued card. This is a spectacular example of original artwork from one of nonsport-card collecting's most popular sets. Watercolor on board. Dimensions: 6-1/8 x 4 inches. In Near Mint condition. Reserve $500. Estimate $1,000+. SOLD FOR $1,067