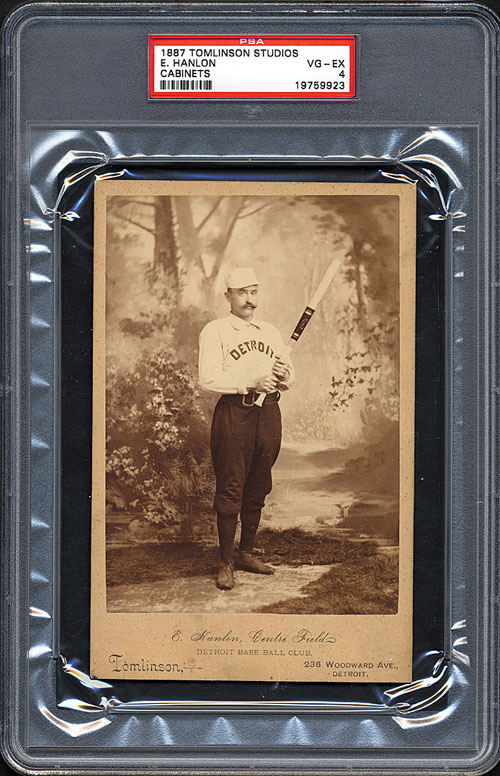 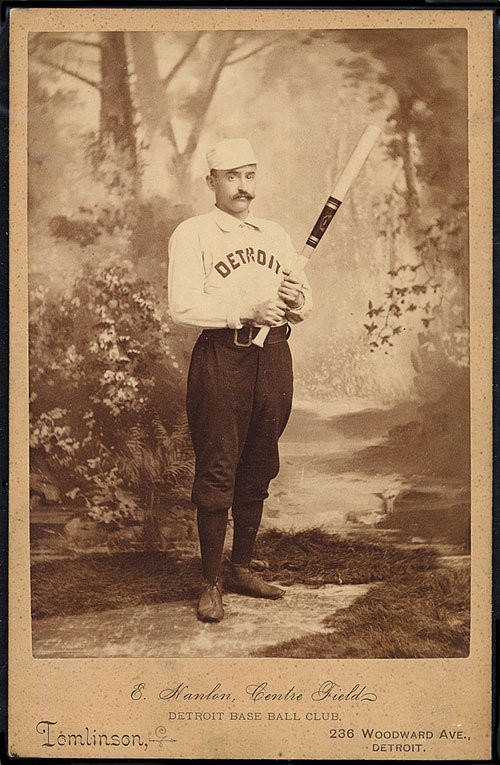 Graded VG-EX 4 by PSA. Rare cabinet card picturing Hall of Famer Ed Hanlon as a member of the 1886 Detroit Wolverines. The photograph, taken in a formal studio setting, captures Hanlon posing in full uniform while holding a bat. Hanlon is identified in print at the base of the mount ("E. Hanlon, Centre Field"), as is the photographer ("Tomlinson"). The Detroit Wolverines were frequent visitors to Frank. N. Tomlinson's photography studio in 1886, as evidenced by the various team cabinets that have survived. While none of those 1886 Detroit team cabinets would be referred to as "common," they are not nearly as rare as individual player cabinets of Detroit players from that season. This is the first 1886 Tomlinson Studios Hanlon Detroit Wolverines cabinet photo we have ever offered and it has the added appeal of being entirely new to the hobby. Our consignor, whose family lived in Detroit in the 1800s (she still lives in Michigan), just recently discovered this cabinet while going through a pile of old family photos that had been stored away for decades. At the suggestion of a local memorabilia dealer, she sent the cabinet to PSA herself for grading before consigning it to this auction. This is certainly one of the major highlights of the many "internet only" lots in this auction (all of which arrived too late for inclusion in the catalog) and one that would be a worthy addition to even the most advanced nineteenth-century baseball collection. The photo displays extraordinary clarity and is in Near Mint to Mint condition. The mount (4.25 x 6.5 inches) has minor border and corner wear, as well as some insignificant scattered pinpoint foxing. Reserve $1,000. Estimate $2,500+. SOLD FOR $11,850