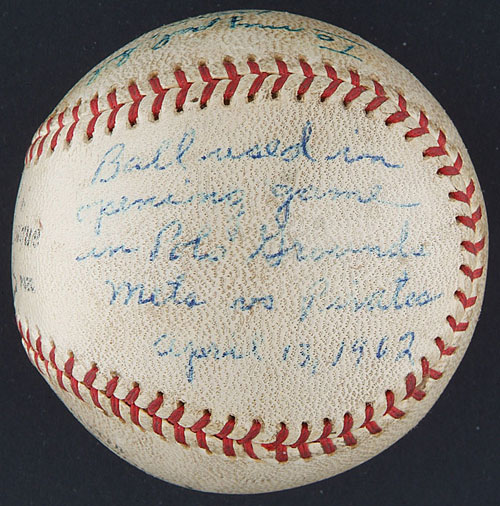 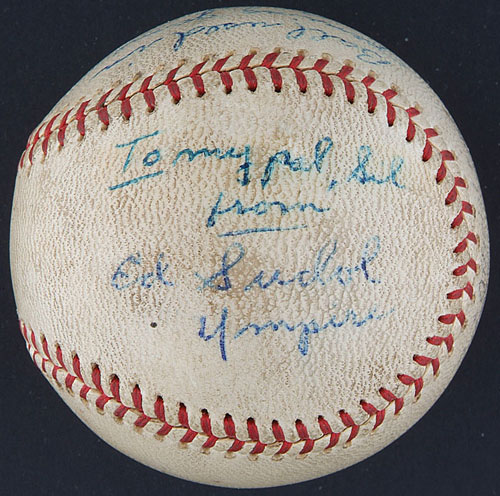 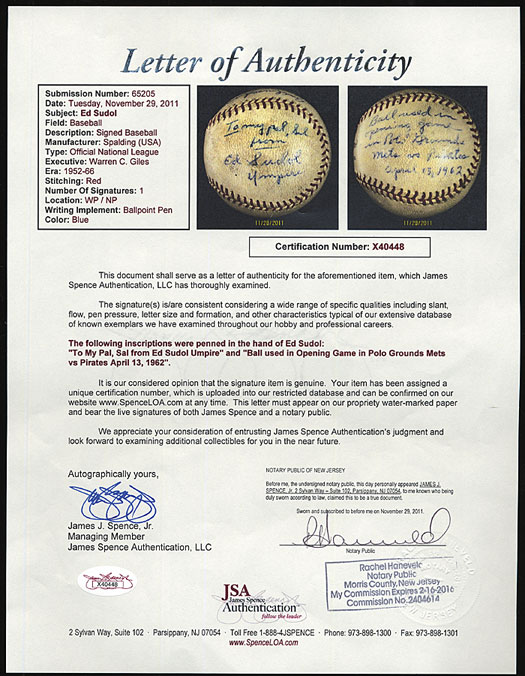 Offered here is one of the most fascinating and significant relics we have ever seen or heard of relating to the birth of the New York Mets franchise: an official National League (Giles) ball used during the club's first home game on April 13, 1962. Only 12,447 fans braved the rain that day to watch the Mets take on the Pirates at the Polo Grounds. One of the fans in attendance that day was our consignor's uncle Silvio, who just happened to be very good friends with umpire Ed Sudol. Sudol was the first-base umpire that afternoon and following the game, which the Pirates won by a score of 4-3, he presented Silvio with a ball used during the Met's historic home opener. It has remained a cherished family keepsake ever since. The ball's provenance is duly noted by two separate period blue-ink inscriptions personally penned by Sudol on adjacent panels. The first reads "To my pal, Sil/from/Ed Sudol/Umpire," while the second documents its game-used status: "Ball used in/opening game/in Polo Grounds/Mets vs Pirates/April 13, 1962." Accompanying the ball is a letter from our consignor in which she details its history. While it is often the case that game-used balls require a leap of faith, in this particular instance we do not believe a leap of faith is required. We have no doubt that this is an actual game-used ball from the first home game in Mets franchise history! The ball also comes with a full LOA from James Spence which specifically notes that both inscriptions were written in Ed Sudol's hand. The Mets' home opener on April 13, 1962, was the second game of the season for the club, which lost its season opener 11-4 against the Cardinals in St. Louis on April 11th. The Mets, of course, went on to rewrite the record books that seasons, finishing the year with 120 losses, a mark of futility that has never been equaled. The ball is moderately soiled, with a few abrasions, which are consistent with its game-used status. This is a remarkable ball and may be our favorite early Mets item we have ever offered. This is an extremely significant, unique, and extraordinary souvenir from the first home game in New York Mets franchise history. LOA from James Spence/JSA. Reserve $500. Estimate $1,000+. SOLD FOR $5,629