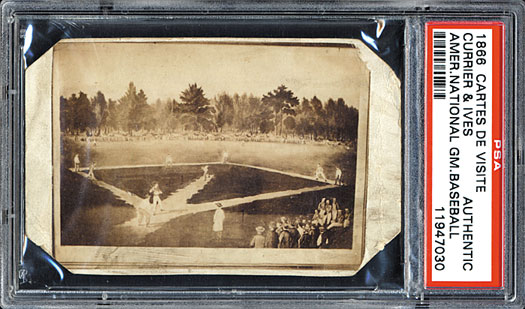 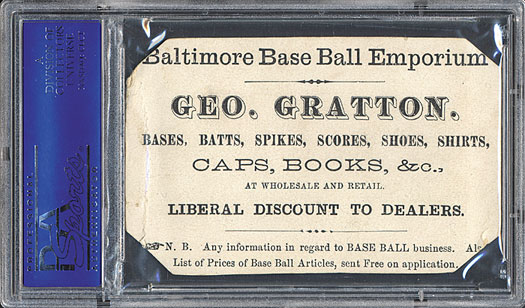 Recent research by John Thorn (Major League Baseball's official historian, and author of many extraordinary baseball books, including Baseball in the Garden of Eden ) has redefined the enormous significance of this card. Presented is the only example known of an advertising card which has long been recognized as one of the earliest extant baseball cards. It can now also be recognized as the only known example of the only advertising baseball card featuring legendary early pitching star James Creighton!

We have sold this very card previously and ever since have always felt that its enormous significance was not fully appreciated. The fact is, even we did not fully appreciate its great significance. . . until we read John Thorn's article detailing the long-lost true identification of the scene and the players featured on the famous Currier & Ives American National Game of Base Ball lithograph that is featured on this 1866 baseball advertising trade card. Here is a link to the article detailing John Thorn's remarkable research:

In short: Published in 1866, the American National Game of Base Ball was one of Currier & Ives most famous prints. The print features a game-in-progress scene that has long been described as the 1865 Grand Match for the Championship between the Atlantics of Brooklyn and the Mutuals of New York, which was played on August 3, 1865. But the fact is that this identification is totally inaccurate. The Currier & Ives American National Game of Base Ball print actually features an artist's representation of an 1860 championship game between the Brooklyn Atlantics and the Brooklyn Excelsiors (with James Creighton on the mound pitching) that was never played! In 1860, the defending champion Atlantics and the Excelsiors had split their first two contests, but trouble with the crowds dictated that the Excelsiors abandon the field of the deciding championship match. The Atlantics and Excelsiors never played each other at the Elysian Fields, as featured in the famous Currier & Ives print. It is an artwork featuring the Championship game of 1860 that never was!

Discovered by REA in 2005 (previously unknown), this 1866 CDV baseball card features a photographic image of the famous Currier & Ives American National Game of Base Ball lithograph on the front. The reverse features an advertisement for George Gratton's "Baltimore Base Ball Emporium." This establishment was one of the first in the country to specialize in all products relating to baseball, including "bases, batts [sic], spikes, scores, shoes, shirts, caps, books," etc. The Baltimore Base Ball Emporium, located on Baltimore Street east of Calvert, had its grand opening in 1866. Based on the style of the card, the year of the grand opening of the store, and the year of issue of the Currier & Ives print featured on the front (also 1866), it is our opinion that it is a certainty that this advertising card dates precisely from 1866. It is also very likely that the then just-released Currier & Ives print featured on the CDV was available for sale at the Baltimore Base Ball Emporium. Though Currier & Ivesâ€™ American National Game of Base Ball is one of baseball's most famous early images, it has long been misidentified and only now, with the benefit of John Thorn's extraordinary research, has the true significance of the image been revealed.

The players featured on this print are not generic depictions. As John Thorn details, on the large scale print Creighton can be identified and is the pitcher on the mound. The other Excelsiors players on the field are also actual likenesses. Six members of the Atlantics can be clearly identified at the bottom right. They are Sid Smith, Joe Start, Dickey Pierce, Fred Crane, John Galvin, and Tom Pratt. In the crowd scene, facing the viewer is Pete O'Brien. Because of the small scale of the CDV image, identification of the players on the card is impossible or at the very least far more difficult than when viewing the larger-scale Currier & Ives print, but O'Brien in particular can still be easily identified with a magnifying glass. As an advertising card, this style card is technically referred to as a "trade card." In the mid to late nineteenth century, trade cards were a very popular form of advertising which merchants distributed to customers, and which featured advertising for the establishment or, in some cases, a particular product.

If the Baltimore Base Ball Emporium was, indeed, a seller of the Currier & Ives print in 1866, this card would also then hold the distinction of being the first baseball card issued to promote the sale of a specific manufactured product. Today fewer than ten original examples of the 1866 Currier & Ives American National Game of Base Ball print survive. The last example of this famous print to be sold realized over $80,000. This trade card is the only known example of the only known period card featuring this important and classic Currier & Ives image. By any measure, this is one of baseball-card collecting's earliest issues, and is extremely important as one of the very few known baseball advertising cards dating from the dawn of the game's great popularity as America's National Pastime. The fact that it features James Creighton adds a fascinating and extremely important new dimension to its great significance. This is all the more so now that the year of issue of one of the few cards previously believed to predate 1866, the James Creighton CDV card featuring his individual image, is in question (along with related questions regarding exactly who issued the card). As John Thorn notes, there are only three other depictions of James Creighton known: a team shot of the 1860 Excelsiors, the CDV produced after his death, and a crepe-draped woodcut portrait published on November 4, 1865 in Frank Leslieâ€™s Illustrated Newspaper .