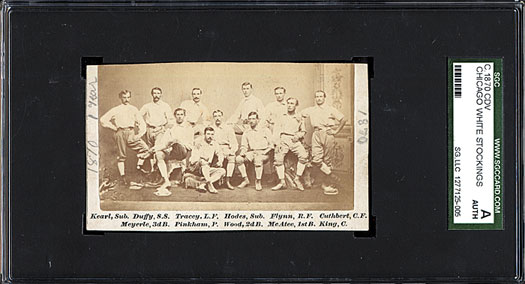 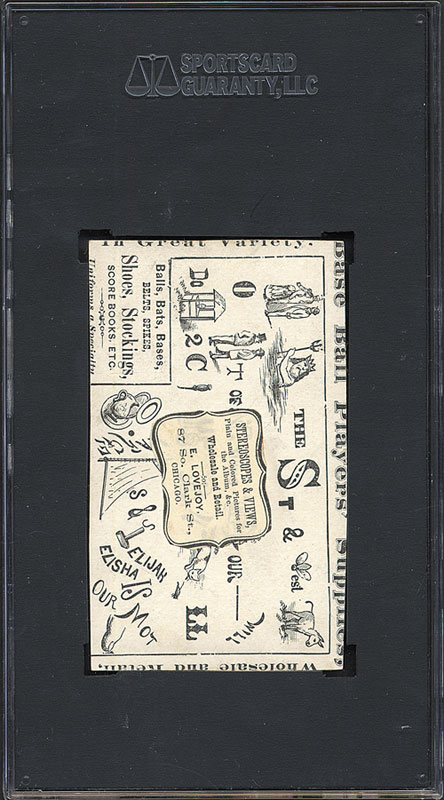 Exceedingly rare Chicago White Stockings advertising trade card dating from 1870. This card originates from an extraordinary new find of eight circa 1870 baseball team cards that were included among 135 nineteenth-century CDVs and trade cards featuring various subjects. (All 135 cards in the find are featured in this auction in ten separate lots.) The formal studio photograph captures eleven members of the Chicago White Stockings posing together in uniform. All of the players are identified in print along the bottom border of the mount: Kearl, Duffy, Tracey, Hodes, Flynn, Cuthbert, Meyerle, Pinkham, Wood, McAtee, and King. The vintage pencil notations "1870 1 Year" and "1870" appear, respectively, on the left and right borders of the mount. The reverse features advertising text, much of it in the form of a rebus, for an unidentified sporting goods manufacturer. (The card may have been issued by Peck & Snyder. We have seen another example with a Peck & Snyder reverse that, like this card, included the phrase "Base Ball Players' Supplies.") Although this card was originally issued or sold by a sporting goods dealer, it was later resold by another merchant as evidenced by a paper label affixed to the reverse that reads "Stereoscopes & Views/Plain and Colored Pictures for/the Album & c./Wholesale and Retail/E. Lovejoy/87 So. Clark St./Chicago."

The White Stockings were one of the most prominent teams of the era, and this advertising card picturing them is one of the earliest of all baseball cards. A year after its issue, in 1871, seven of the ten players pictured here comprised the nucleus of Chicago's entry in the newly formed National Association, baseball's first professional league. (Flynn played for Troy in 1871, while Cuthbert played for Philadelphia; Kearl does not appear on any major league roster during the period.) This is only the second example of this exceedingly rare card we have ever handled and few others are known. The card (3.875 x 2.375 inches) has been trimmed along all four borders, but is otherwise in outstanding condition. (Trade cards, which were normally larger than CDVs, were often trimmed at the time so that they could fit into CDV albums.) The photo displays remarkable clarity and contrast, offering tremendous detail, especially with regard to the uniforms. The mount displays only light wear front and back. Without regard to the trimming, the card is in Excellent to Mint condition overall. This is a far superior card to the only other example we handled over a decade ago (which was trimmed and creased), and may represent one of the finest examples known. As noted earlier, this card is new to the hobby and was just recently discovered by our consignor among 135 CDVs and trade cards left to her by her parents, who purchased them over twenty years ago at an antiques shop. (All of the additional baseball CDVs and trade cards, as well as the remaining cards in the collection, are featured elsewhere in this auction.) Encapsulated and labeled "Authentic" by SGC. Reserve $1,000. Estimate (open). SOLD FOR $11,850