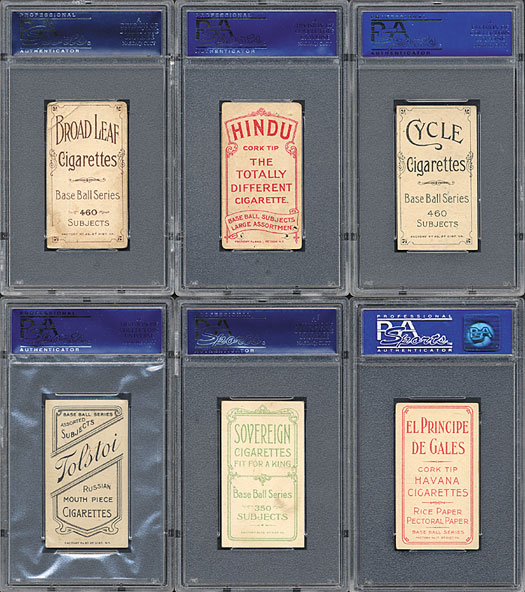 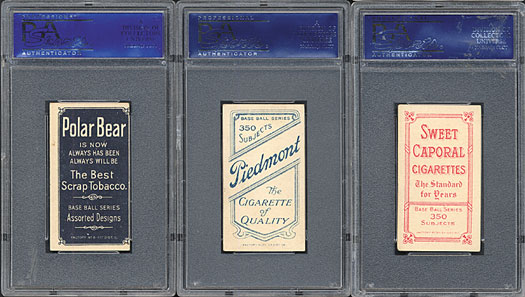 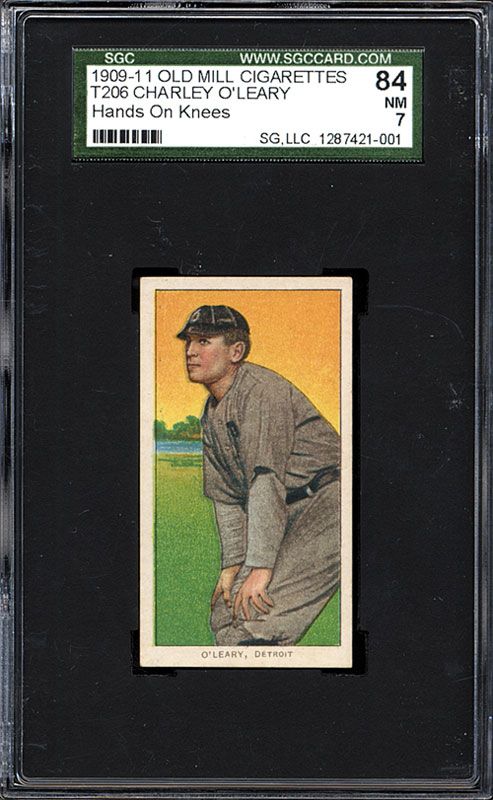 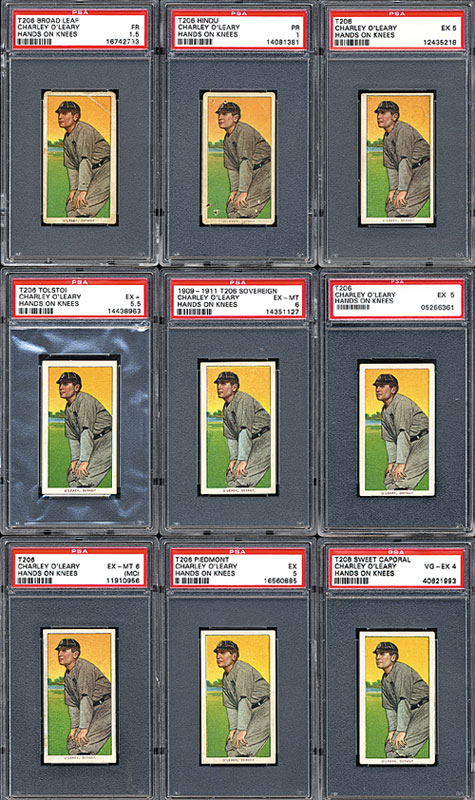 Presented is one of the most amazing, unusual, and difficult-to-assemble T206 collections we have ever had the privilege of offering. Even a glance will communicate its extraordinary nature. Presented is a unique collection of seventeen T206 Charley O'Leary cards (all the same pose, hands on knees), each with a different advertisement on the reverse. This represents a COMPLETE collection of all known backs for this card, including all rarities (most notably the extremely rare Broad Leaf 460 advertising back, but also including many other rare backs, such as Red Hindu, and even a blank-backed example, an extreme rarity in its own right that is virtually impossible to find for any specific T206 front). Obviously, a great deal of time and effort has been invested in the assembly of this collection. Complete back collections of this size and scope for a specific T206 front are not seen because, with few exceptions, they simply do not exist. This is the first collection of this type we have ever offered, and we have to say that, seeing all these T206 O'Leary cards, all with different backs, all in one place, has a impressive visual impact even for us (and we've seen a lot of T206s!).

T206s are the single most important and highly collected of all 1910-era cards. One of the primary characteristics of the T206 set is that most players are featured with different advertising on the reverses. This high-quality collection of seventeen cards of O'Leary captures the spirit of the entire set, illustrating the different advertisements on the backs of the same player pose. Each card is a striking and high-quality example on its own, but together they complement one another, and tell part of the story of the T206 set. All seventeen cards have been graded and encapsulated by PSA (except four). They grade as follows: One SGC NM 84: Old Mill. Three PSA EX-MT 6: Sovereign 350 (Apple Green), Polar Bear (MC), and Piedmont 350-460 Factory 25. One PSA EX+ 5.5: Tolstoi. Four PSA EX 5: Cycle 460 (with a ghost overprint of the word cycle on the front), El Principe De Gales, Sweet Caporal 350-460 Factory 42, and Piedmont 350 Factory 25. Four PSA VG/EX 4: Sweet Caporal 350-460 Factory 42 with overprint (SGC VG/EX 50), Sweet Caporal 350 Factory 25, Sweet Caporal 350 Factory 30, and Sweet Caporal 350-460 Factory 25. One SGC VG 40: Piedmont 350-460 Factory 42. One PSA FR 1.5: Broadleaf 460. One PSA PR 1: Red Hindu. One SGC Authentic: Blank Back. Each card has vibrant colors and a clean reverse (except one: the Blank Back has a stain on reverse). This group of seventeen cards represents every advertisement back known to exist for the T206 O'Leary tobacco card. Total: 17 cards. Reserve $2,500. Estimate (open). SOLD FOR $11,258