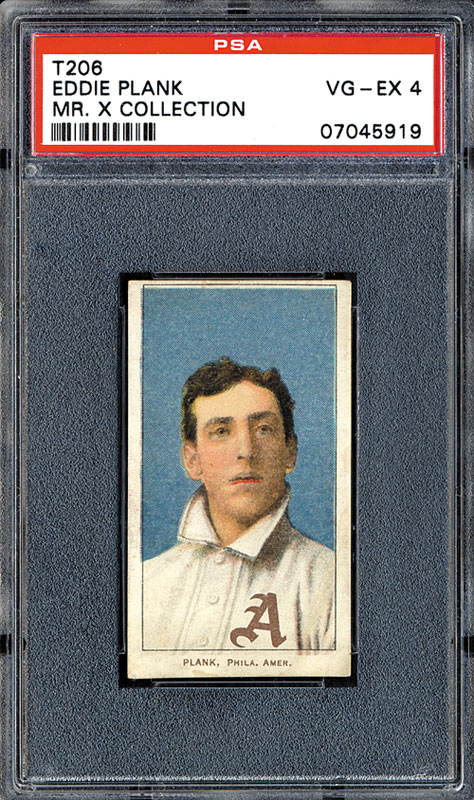 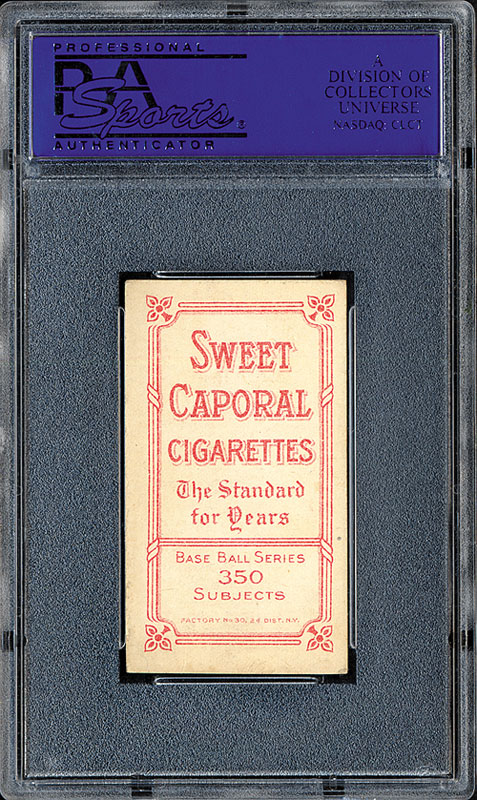 Addendum: It has been brought to our attention that in the opinion of some collectors the cut along the bottom border of this T206 Plank is consistent with the card having a very slight trim. They may be correct. We canâ€™t say with certainty that the card is trimmed, it may not be, but after careful examination, we do think this is a possibility. It has also been brought to our attention that many years ago this card resided in a PSA VG 3 holder. While by policy Robert Edward Auctions does not submit cards for regrading (we donâ€™t think that is our role), it is a common practice by many collectors and dealers and comes with the territory with graded cards. Sometimes the same card can get graded differently at different times. In addition, sometimes a card that is deemed particularly strong for the grade can be submitted for review and get bumped a grade. (And who knows how much pull the famous and mysterious â€œMr. Xâ€ had!) The following is a link to a 2005 article from the PSA website about the "Mr. X Collection": http://www.psacard.com/articles/article_view.chtml?artid=4391 While the entire collection was promoted as "The Mr. X Collection" from this article it appears that only the Plank and the Magie cards were actually noted on the PSA labels as from the "Mr. X Collection." Graded VG-EX 4 by PSA. Superb high-grade example of T206 Eddie Plank, one of card collecting's most legendary rarities. "Wagner, Plank, and Lajoie" are the three baseball card rarities that have long been referred to as "The Big Three." These three baseball cards, Wagner and Plank from the T206 series, and Nap Lajoie from 1933 Goudey, have traditionally represented the height of rarity, desirability, and value in the baseball card world. When Jefferson Burdick first published the American Card Catalog in the 1930s, the T206 Wagner was listed as the most valuable baseball card in the world at a then-incredible $50. Plank was the second most valuable card, listed at $10. Over the years, since the days of Jefferson Burdick, other cards have come to be universally recognized as among collecting's most desirable cards, but "Wagner, Plank, and Lajoie" will always be the inaugural members of this elite club, and the three cards that purists among baseball-card collectors will always recognize as the ultimate symbols of rarity and desirability. The reasons for the great rarity of Plank are shrouded in mystery. One popular explanation that appears to have no basis in fact is that the printing plate broke. It is far more likely that Plank objected to having his picture packaged with cigarettes. Like Wagner, Plank is in all the candy-card sets of the era but does not appear in any of the primary tobacco-card sets issued during this same period, such as T3, T201, T202, T205, or T207. Since Plank was one of the greatest stars of the day, it is unlikely that the tobacco companies simply forgot to put him in all these sets. It is far more likely that there is a common explanation. This is a magnificent example of T206 Plank, bright and clean, with bold colors, a hint of wear to the corners, just the lightest hint of a surface crease (barely detectable only under bright light), and a slightly out-of-registry image. Centered to the top border. This is a strong Vg-Ex card which in the "old days" would have been called Ex. It is particularly rare to find such a problem-free example of this card. Like all T206s, including Wagner, a very large percentage survive in lower grades, and very few in higher grades. Among the more common cards in the set, which include virtually all, the law of averages allows for a much greater possibility of a given card being found in high grade, but the pool of survivors of the extreme rarities such as Wagner and Plank make high-grade examples far rarer and more desirable than a simple numerical grade might suggest. The "Mr. X Collection" designation was the amusing pedigree that was famously assigned to the label of every card of a T206 set (missing only Wagner and the rare Doyle) graded by PSA for the mysterious "Mr. X" in 2005. All that was ever revealed about "Mr. X" was that he was very famous and that he was in show business. To this day, we have no idea who "Mr. X" is or was, but we do know that he did a great job of assembling an extremely high quality T206 set. The entire set was sold individually on eBay. Every once in a while a card from this collection surfaces. This Plank card was the crown jewel of the "Mr. X" collection. The reverse is bright and clean and features an advertisement for Sweet Caporal Cigarettes (350 Subjects, Factory No. 30). This is a very attractive example of T206 Eddie Plank, one of card collecting's greatest and most sought after rarities. SMR value for the assigned grade is $85,000. Reserve $25,000. Estimate $50,000+. SOLD FOR $56,288