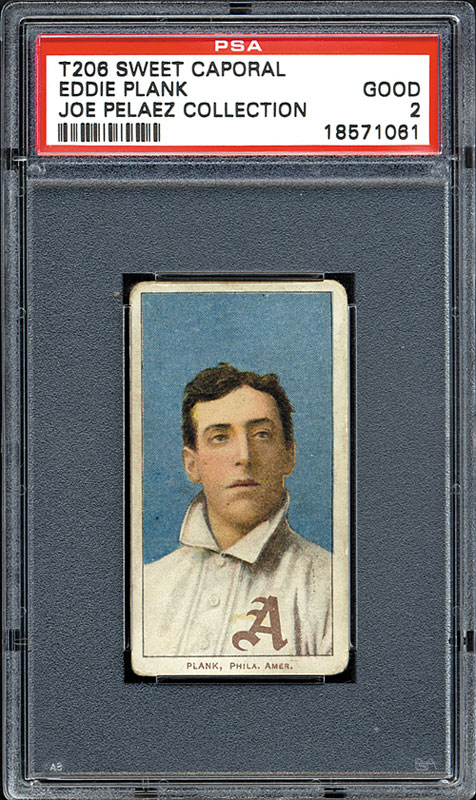 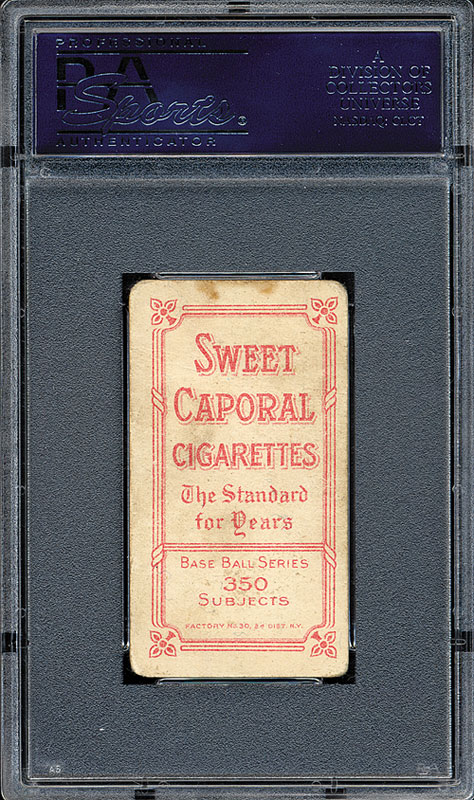 Graded GOOD 2 by PSA. Extremely attractive and very conservatively graded example of T206 Eddie Plank, one of card collecting's most legendary rarities. This is a particularly strong card for the grade. It has been downgraded by PSA due to an insignificant surface crease below the word "Sweet" and a light stain on the top edge of the reverse. At a glance, this card could be mistaken for Vg-Ex, or at least Vg condition. This is a beautiful card! "Wagner, Plank, and Lajoie" are the three baseball-card rarities that have long been referred to as "The Big Three." These three cards, Wagner and Plank from the T206 Series, and Nap Lajoie from 1933 Goudey, have traditionally represented the height of rarity, desirability, and value in the baseball-card world. When Jefferson Burdick first published The American Card Catalog in the 1930s, the T206 Wagner was listed as the most valuable baseball card in the world at a then-incredible $50. Plank was the second most valuable card, listed at $10. Over the years, since the days of Jefferson Burdick, other cards have come to be universally recognized as among collecting's most desirable cards, but "Wagner, Plank, and Lajoie" will always be the inaugural members of this elite club, and the three cards that purists among baseball-card collectors will always recognize as the ultimate symbols of baseball-card rarity. The reasons for the great rarity of Plank are shrouded in mystery. One popular explanation, which appears to have no basis in fact, is that the printing plate broke. It is far more likely that Plank objected to having his picture packaged with cigarettes. Like Wagner, Plank is in all the candy-card sets of the era but does not appear in any of the primary tobacco-card sets issued during this same time period, such as T3, T201, T202, T205, or T207. Since Plank was one of the greatest stars of the day, it is unlikely that the tobacco companies simply forgot to put him in all these sets. It is far more likely that there is a common explanation. As has been noted and can easily be seen, this is a very attractive card, and though it does have flaws (most notably, evenly rounded corners), it does not have the terrible scuffs and countless creases that are usually associated with this card in this grade. The card is bright and clean. The portrait is bold and crisp. The reverse, which is centered to the right, features an advertisement for Sweet Caporal Cigarettes (350 Subjects, Factory No. 30). This is an outstanding opportunity to acquire a magnificent yet still relatively affordable example (compared to higher-grade examples) of this legendary rarity, long recognized as one of baseball-card collectingâ€™s â€œtop threeâ€ (the other two being T206 Wagner and 1933 Goudey Lajoie). From the Joe Pelaez Collection. SMR value for the assigned grade is $23,000. Reserve $5,000. Estimate $10,000/$20,000+. SOLD FOR $41,475