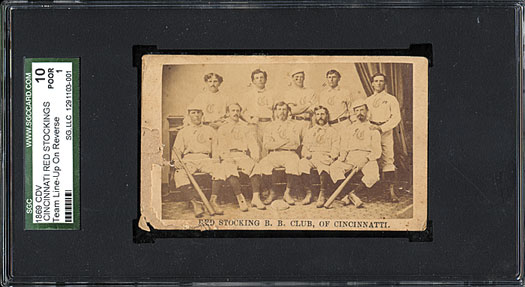 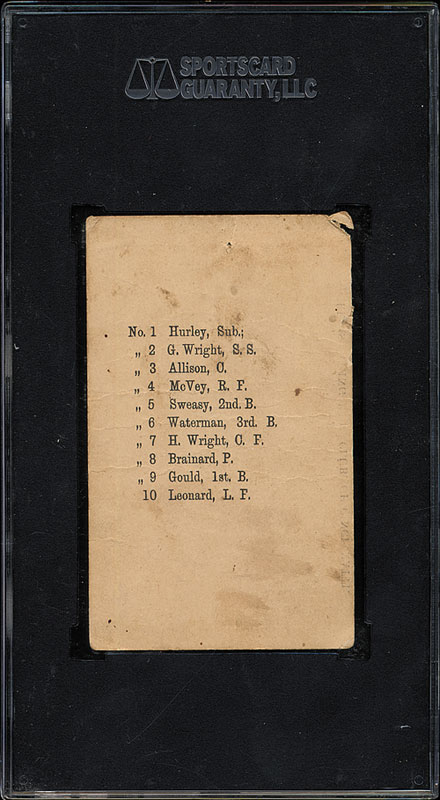 Graded POOR 10 by SGC. Rare style carte-de-visite of the 1869 Cincinnati Red Stockings, baseball's first all-professional team. This is a newly discovered example of this card, which has always been regarded as one of the hobby's most iconic rarities. There are actually several different styles of 1869 Red Stockings team cards, all featuring the same photograph but displaying slightly different mounts. This is a very unusual variety, with the team name appearing under the team image on the mount ("RED STOCKING B. B. CLUB OF CINCINNATI") and all players identified on the reverse (both extremely desirable design elements that are not shared by all 1869 Cincinnati Reds team CDVs). When this card was issued, the new technologies allowing for the mass production of photographs were in their infancy. Various popular subjects were candidates for such cards, especially famous political figures, entertainers, and historically significant geographical and architectural sites from far away places. These carte-de-visite photographs were intended to be saved and stored in albums. In an age without television and little travel, these cards were a revolutionary tool allowing people to learn about the world around them. It is not surprising that photographs of the 1869 Red Stockings were a popular subject purchased and saved by fans. Led by Harry and George Wright, the Red Stockings toured the nation and went undefeated for ninety-two consecutive games. Because of their dominance, the team was a legend in its own day, though at the time, of course, no one could have imagined the impact the Red Stockings would have on the game. Just two years later, the National Association, baseball's first all-professional league, was formed in large part because of the success of the Red Stockings. Shortly thereafter, in 1876, the American Association gave way to the National League and baseball officially became big business.

The photo displays slightly light contrast (a trait common to nearly all known examples); however, the contrast is very respectable for an 1869 Red Stockings CDV, as evidenced by the fact that the Cincinnati uniform logos and the identifying numbers on each player (which correspond to the player identifications on the reverse) are clearly discernible. The mount displays surface paper loss along both the left and bottom borders, concentrated in the area of the bottom left corner, which also includes a few small tears. One of the tears slightly extends through the left border of the photo (tiny amount of paper loss) and is a continuation of a minor crease (1.5 inches long) that bisects the images of Sweasy and Waterman, who are seated to the left. The word "Red" in the printing along the base of the mount ("Red Stocking B. B. Club of Cincinnati") is slightly affected by the flaws in the corner, but remains completely legible. A number of other minor creases to both the photo and mount are also evident upon close inspect. While the SGC grade is technically accurate, both the outstanding clarity and better-than-average contrast of the photo make this an extremely desirable example of this important card. Reserve $1,000. Estimate (open).
SOLD FOR $10,073