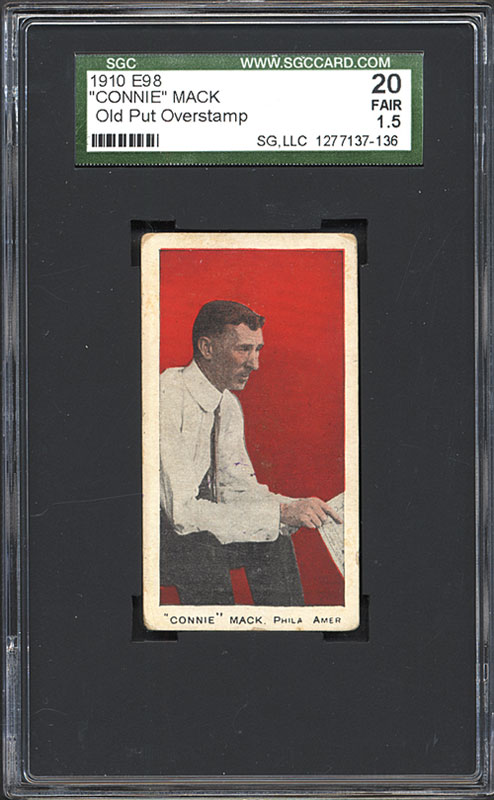 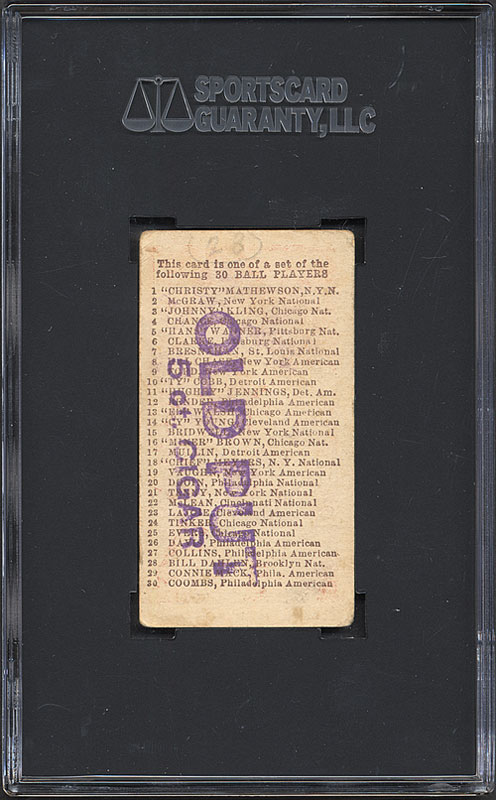 Graded FAIR 20 by SGC. Presented is an "Old Put 5 ct. Cigar" E98 overprint, one of card collecting's most unusual and rare sample cards. This example is particularly extraordinary as it features Hall of Famer Connie Mack. This is the only "Old Put 5 ct. Cigar" E98 overprint card of Connie Mack we have ever seen and is certainly one of the rarest of all Mack cards. "Overprinting" is a term commonly used to refer to the rare practice of a company taking cards already issued by another manufacturer and adding advertising, in the form of printing or an ink stamp, to allow the cards to function as their own advertising vehicle at modest cost. In this case, the overprint on this E98 Mack advertises for "Old Put 5 ct. Cigars." The overprint on the "Old Put" Mack is an attractive purple and really stands out. "Old Put" may not have been able to afford to issue its own set of cards, or simply chose not to do so. Since E98s have no advertising on the reverse (just a checklist, though the ACC states they were "probably issued by Briggs"), "Old Put" added its own advertising to the backs of these already printed cards. Judging by how few have survived, it can be assumed that this practice was not very successful. This is an outstanding example of one of card collecting's rarest and most unusual sample cards. The card has a brilliant red background, with a flawless image, evenly rounded corners, and is very well centered. The card has a Vg/Vg-Ex appearance, but has been downgraded by SGC only due to the number "(28)" written in pencil on the top of the reverse. This is an extremely attractive, and possibly unique Connie Mack example of one of card collecting's rarest and most interesting 1910-era sample cards. Reserve $500. Estimate (open).
SOLD FOR $6,518