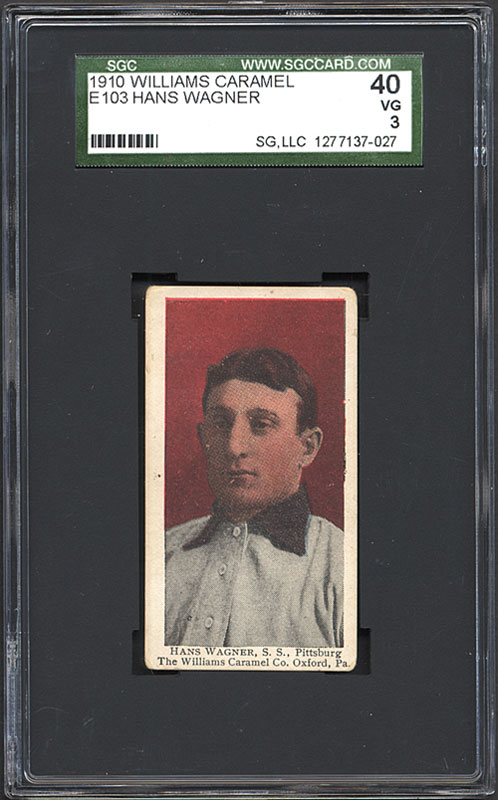 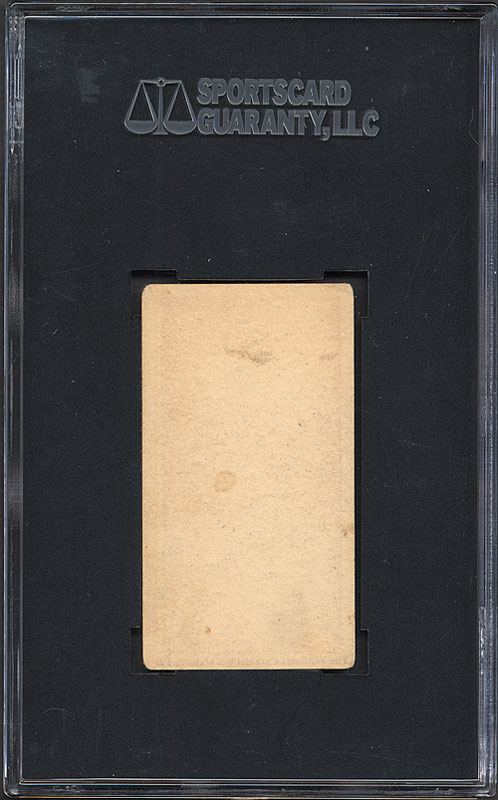 Graded VG 40 by SGC. Only two graded higher. E103 Williams Caramel of Honus Wagner, one of the key cards of this very rare and classic 1910-era candy set. This is one of Honus Wagner's most striking cards, featuring a portrait image reminiscent of the pose which appears on his famous T206 card. The E103 set is easily distinguished from other caramel sets of the era by the deep red background highlighting each player's portrait. As noted on each card along the lower margin, The Williams Candy Company was located in Oxford, Pennsylvania; this candy was very likely issued on a somewhat regional basis, which would account for the cards' great rarity. When they are found, they usually have serious condition problems, which is not surprising considering that these cards were issued to children one card per package of candy. This is one of the finest examples known of this important card. The SGC population report numbers speak for themselves: A total of fifteen E103 Wagners have been graded in the history of SGC, and only two examples (one VG/EX 50 and one EX 60) have ever graded higher than the offered card. The others have graded as follows: one Authentic, three POOR 10, one FAIR 20, five GOOD 30, and three VG 40 (including this example). Even more important, this is an especially pleasing card for the grade assigned by SGC. Bright, clean, crisp, with a flawless image and a deep red background, centered slightly to the right, with even wear to the corners, and only the most insignificant tiny creases in the upper right and lower left corner. The blank back has a few light caramel stains and a couple tiny surface abrasions (not easily seen and of little or no consequence). This is a rare and very attractive example of one of Wagner's most desirable and striking vintage cards. Reserve $1,500. Estimate $3,000/$5,000. SOLD FOR $5,629