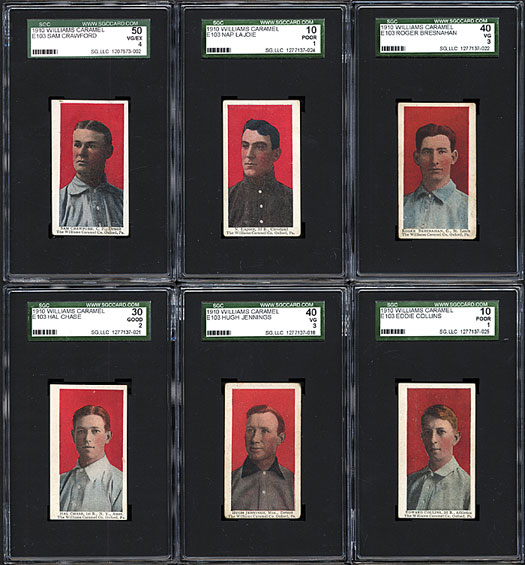 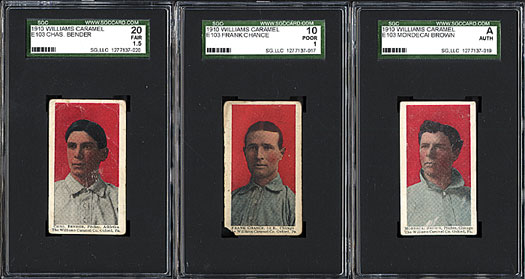 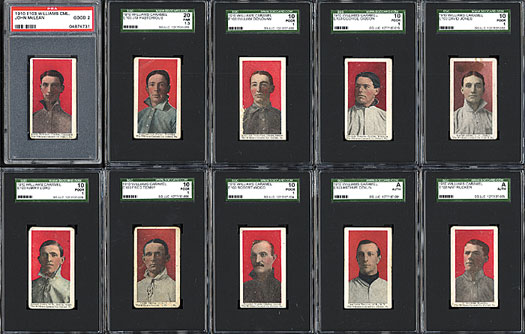 Near-complete set of E103 Williams Caramel is comprised of twenty-seven of the thirty cards in the set, including eight Hall of Famers, highlighted by Nap Lajoie. This set is almost never seen in complete or near-complete set form. The entire near-set has been graded and encapsulated by SGC (submitted by REA, with the exception of one card which was already graded by SGC when we received it and one card which is graded by PSA). This collection of twenty-seven cards is missing only the following three cards for completion: Cobb, Mathewson, and Wagner (all offered as separate lots in the auction). E103 Williams Caramel is one of the most highly regarded and scarcest caramel-card sets of the era. The SGC condition report is as follows: One EX 60: Ewing. Two VG/EX 50: Crawford (HOF) and Jordan. Six VG 40: Bresnahan (HOF), Davis, Dooin, Jennings (HOF), McQuillan, and Thomas. Two GOOD 30: Chase and McLean (PSA GOOD 2). Four FAIR 20: Bender (HOF), Doyle, Leach, and Pastorius. Nine POOR 10: Chance (HOF), Collins (HOF), Donovan, Gibson, Jones, Lajoie (HOF), Lord, Tenney, and Wood. Three Authentic: Brown (HOF), Devlin, and Rucker. The E103 Williams Caramel set is easily distinguished from other caramel sets of the era by the bright red background highlighting each player's portrait. As noted on each card along the lower margin, The Williams Candy Company was located in Oxford, Pa., and this candy was very likely issued on a somewhat regional basis. This fact almost certainly accounts for their great rarity. When they are found, they usually have serious condition problems, which is not surprising considering that these cards were issued to children one card per package of candy. Total: 27 cards. Reserve $2,500. Estimate $5,000++. SOLD FOR $13,035