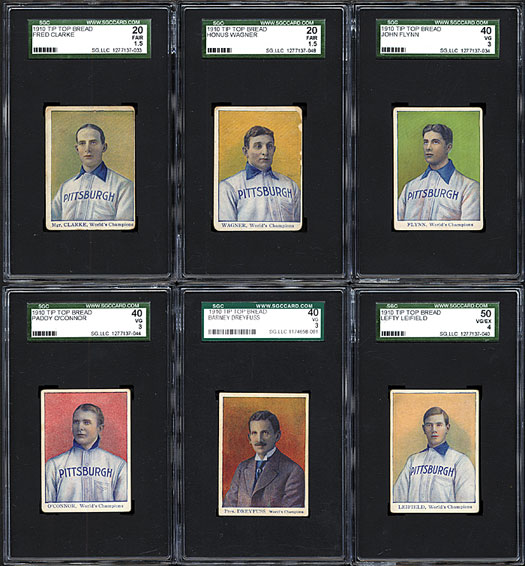 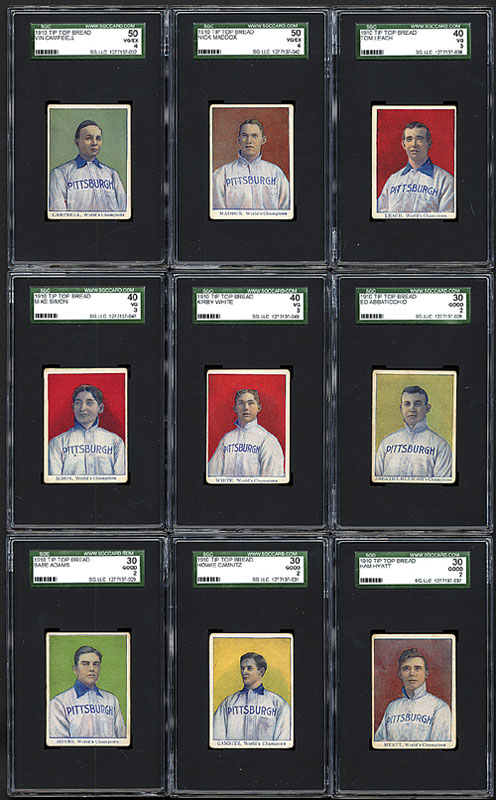 Complete set of 1910 D322 Tip Top Bread Pittsburgh Pirates. This extremely rare 25-card set was regionally issued in the Pittsburgh area by the Ward-Mackey Company, one card per loaf. Each card features a member of the Pirates, the National League champions of the previous year. Even sample cards from this set are rare. Literally only a few complete sets of D322 Tip Top Bread cards have ever been assembled. The entire set has been graded and encapsulated by SGC (submitted by REA, with the exception of two cards which were already graded by SGC when we received it). The key card in the set is Honus Wagner. This is one of Wagner's rarest and most striking cards, and features the same Carl Horner image as appears on his famous T206 card. The reverse of each card has advertising for Tip Top Bread, and provides a complete checklist for the set. The SGC condition report is as follows: Three VG/EX 50: Campbell, Leifield, and Maddox. Six VG 40: Dreyfuss, Flynn, Leach, O'Connor, Simon, and White. Nine GOOD 30: Abbaticchio, Adams, Camnitz, Hyatt, Leever, Phillippe, Webb, Wilson, and Forbes Field. Four FAIR 20: Fred Clarke (HOF), Locke, Miller, and Honus Wagner (HOF). Three POOR 10: Byrne, Gibson, and Boy Mascot. Though the cards in this set vary in grade, several cards are particularly strong, and most of even the lowest-graded examples have tremendous eye-appeal. The equivalent SMR value for the assigned grades is $9,145. Total: 25 cards. Reserve $2,500. Estimate $5,000++. SOLD FOR $10,073