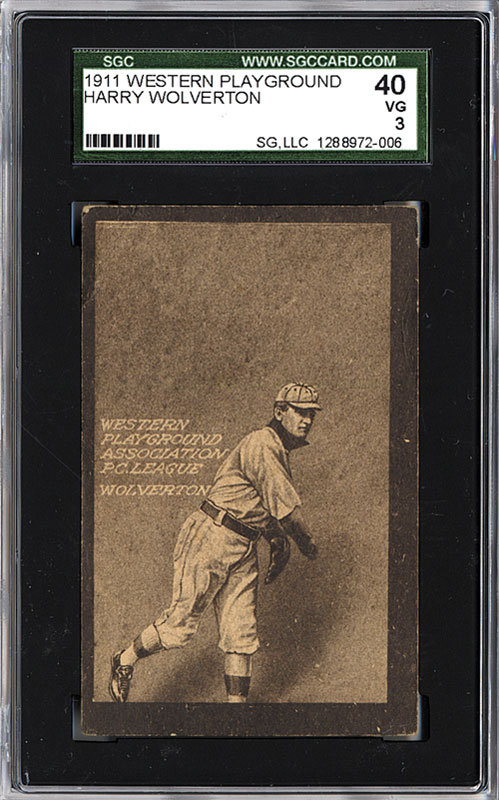 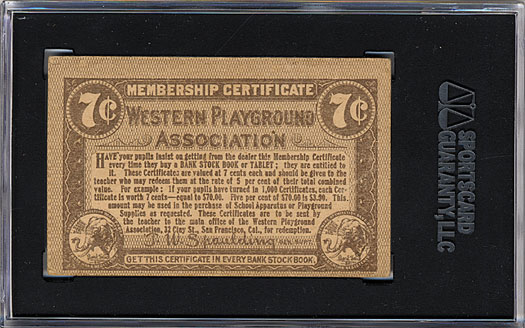 Graded VG 40 by SGC. Highest-graded example by SGC. Extremely rare sample card from this unusual Pacific Coast League issue. This card is new to the modern collecting world. It is one of the highlights from a recently discovered 1910-era original-owner card collection. This is a very unusual and distinctively designed card in the Western Playground series, with the pose particularly low in the image area of the card, leaving a great deal of blank background space above. Western Playground cards (2.25 x 3.5 inches) feature stars from the Pacific Coast League. Above the identification of each player reads "Western Playground Association - PC League." The PCL has always been of great interest to card collectors. The 40-card 1911 Western Playground Association set is one of the most distinctive and also one of rarest of all PCL or 1910-era issues. This card and the two others also appearing as their own lots in this auction are the very first Western Playground Association cards we have ever offered. This extremely rare sample card is perfectly clean, front and back, with light, even wear on the corners, a light crease in the upper left, and centered towards the top left. The "Membership Certificate" reverse is also perfectly clean with bold black print. This is a very attractive example, ideal for the serious PCL or sample-card collector, from one of the rarest of all 1910-era issues. Reserve $500. Estimate $1,000/$2,000+.
SOLD FOR $2,133