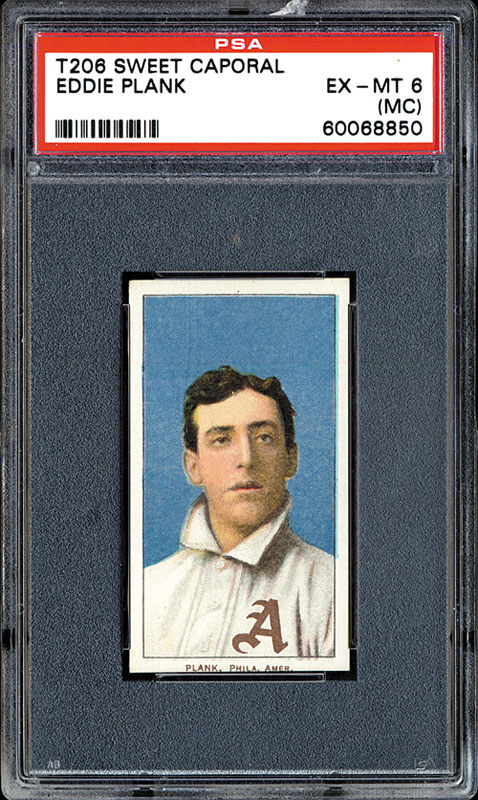 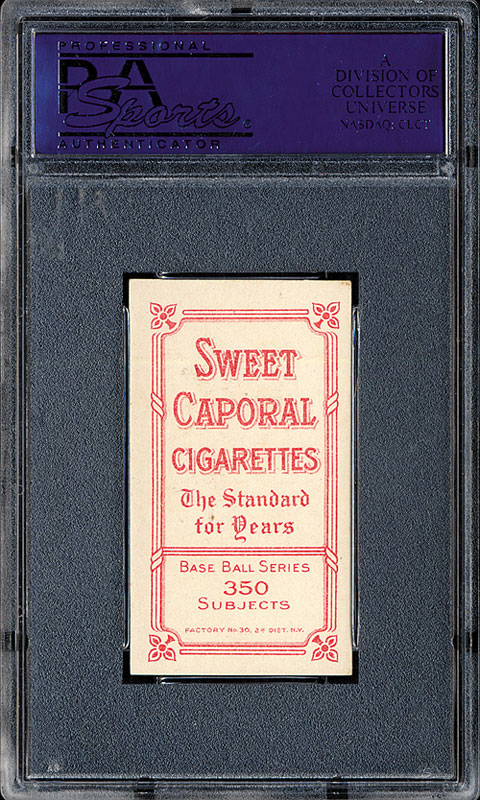 Graded EX-MT 6 (MC) by PSA. Spectacular high-grade example of T206 Eddie Plank, one of card collecting's legendary rarities. Just as is the case with the T206 Wagner, very few T206 Planks exist in high grade. This is one of the highest-grade T206 Planks we have ever seen or offered, and may in fact be the finest we have ever offered. Only the PSA EX-MT 6 example presented in the May 2009 REA auction compares. In our opinion, in all respects with the exception of the ever-so-slight miscut (which is so minor we think it is questionable as to whether it should have a qualifier - we have seen many cards with a greater "miscut" that are not qualified), the offered example is a far superior card. This T206 Plank is one of the finest examples in the universe. Compare this card to others that have been offered over the years. This is easy to do online. It will be impossible not to appreciate that this is a much stronger and superior card that exceeds virtually all other T206 Plank examples in every category that defines a card. According to the the PSA Population report, only five T206 Plank examples have ever been graded higher. "Wagner, Plank, and Lajoie" are the three baseball card rarities that have long been referred to as "The Big Three." These three baseball cards, Wagner and Plank from the T206 series, and Nap Lajoie from 1933 Goudey, have traditionally represented the height of rarity, desirability, and value in the baseball-card world. When Jefferson Burdick first published the American Card Catalog in the 1930s, the T206 Wagner was listed as the most valuable baseball card in the world at a then-incredible $50. Plank was the second most valuable card, listed at $10. Over the years, since the days of Jefferson Burdick, other cards have come to be universally recognized as among collecting's most desirable cards, but "Wagner, Plank, and Lajoie" will always be the inaugural members of this elite club, and the three cards that purists among baseball-card collectors will always recognize as the ultimate symbols of rarity and desirability. The reasons for the great rarity of Plank are shrouded in mystery. One popular explanation that appears to have no basis in fact is that the printing plate broke. It is far more likely that Plank objected to having his picture packaged with cigarettes. Like Wagner, Plank is in all the candy card sets of the era but does not appear in any of the primary tobacco-card sets issued during this same period, such as T3, T201, T202, T205, or T207. Since Plank was one of the greatest stars of the day, it is unlikely that the tobacco companies simply forgot to put him in all these sets. It is far more likely that there is a common explanation. This is a stunning T206 Eddie Plank, crisp and clean, with flawless registration, a striking bold blue background, no creases, and with only the slightest hint of wear to the square corners. Centered to the extreme bottom with the caption letters just touching the edge of the card (the letters are not cut off and although the centering is low it still does not justify the "MC" qualifier). The reverse is perfectly clean and features a boldly printed advertisement for Sweet Caporal Cigarettes (350 Subjects, Factory No. 30). It is particularly rare to find such a problem-free example of this card. Like all T206s, including Wagner, a very large percentage survive in lower grades, and very few in higher grades. Among the more common cards in the T206 set, the laws of statistics allow for a far greater possibility of a given card being found in high grade, but the small pool of survivors of the extreme rarities such as Wagner and Plank make high-grade examples far rarer and more desirable than a simple numerical PSA grade for a T206 card might suggest. Of the sixty-four T206 Planks graded to date by PSA, thirty-two grade either "1" or "2," two grade "2.5," seventeen grade "3" or "4," one "4.5," three grade "5," only four (including the offered example) grade "6," four "7," and one "8." This is an outstanding T206 Eddie Plank; literally one of the finest examples in existence of one of card collecting's most significant rarities. There is no SMR value listed for a qualified PSA EX-MT 6. The SMR value for a straight PSA EX-MT 6 is $180,000. Reserve $25,000. Estimate $50,000+. SOLD FOR $94,800