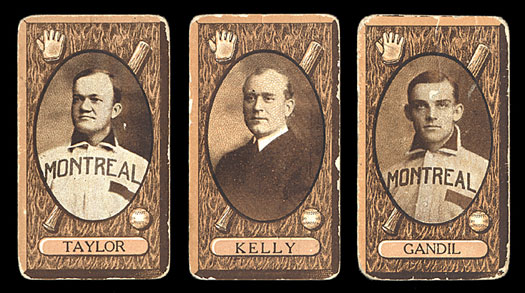 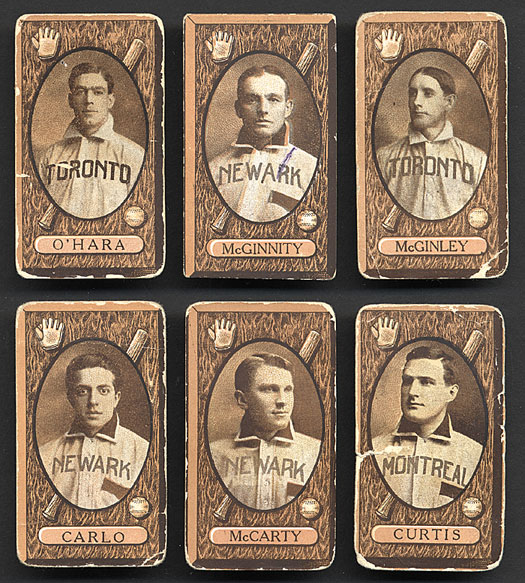 15% grade Ex, 55% range from Vg to Vg-Ex, 30% lesser grades (mostly Gd). Issued in 1912 by the Imperial Tobacco Company, the 90-card C46 set is the only 1910-era tobacco baseball set issued in Canada. The players featured in this set are members of the eight teams of the Eastern League (Rochester, Toronto, Buffalo, Newark, Providence, Baltimore, Montreal, and Jersey City). The set includes many players with Major League experience, including Hall of Famers Joe Kelley and Joe "Iron Man" McGinnity plus Chicago "Black Sox" member "Chick" Gandil. Keys: #1 O'Hara (Gd), 2 McGinley (Fr-Gd), 27 Kelley (Vg), 41 Taylor (Vg), 65 Gandil (Gd), 77 McGinnity (ink mark on chest, otherwise Vg-Ex), 85 Carlo (Fr-Gd), 89 McCarty (Vg), and 90 Curtis (Pr). The unique and striking design of the set, and the fact that many players in the C46 set are familiar to collectors as they also appear in other sets of the era (especially the T206 White Border set), make this extremely rare and beautiful issue of special note to collectors. The C46 cards feature a portrait of the player inside an oval surrounded by a wood-grain background. The flush-to-the-border design make the edges and corners particularly susceptible to chipping and wear. Rarely offered as a complete set in any grade, this is a very attractive complete set of one of the most elusive and condition-sensitive tobacco issues of the era. In all our years we have offered only four other sets. Total: 90 cards. Reserve $1,000. Estimate $2,000/$3,000+. SOLD FOR $2,963