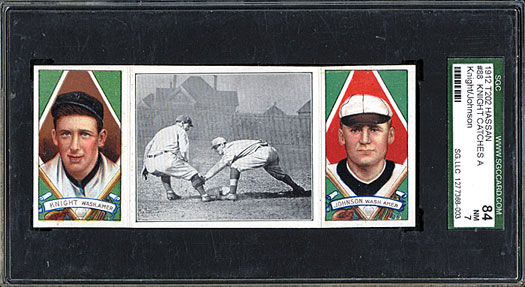 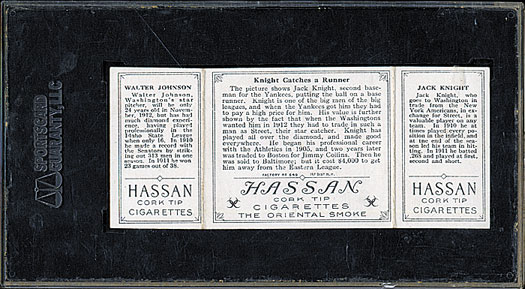 Graded NM 84 by SGC. Extremely high grade example of one of the key cards from the classic T202 Hassan Triple Folders set: #88 "Knight Catches A Runner," featuring Hall of Famer Walter Johnson and Jack Knight on the end panels. Crisp and clean, both front and back, with four sharp corners, and centered slightly towards the top left. The very subtle irregular natural cut along the top and bottom (very difficult to see but present on this card) is a common trait of T202s due to their method of production. The relative rarity of T202 Triple Folders compared to T205 and T206, in addition to the relative rarity of higher-grade T202 examples in terms of percentage, makes T202 Hall of Famers in high grade one of the best values in all of tobacco-card collecting. This is an exceptionally high grade example which would be at home in any high-grade T202, Walter Johnson, or prewar Hall of Fame card collection. The equivalent SMR value for the assigned grade is $1,850. Reserve $500. Estimate $1,000+. SOLD FOR $1,541