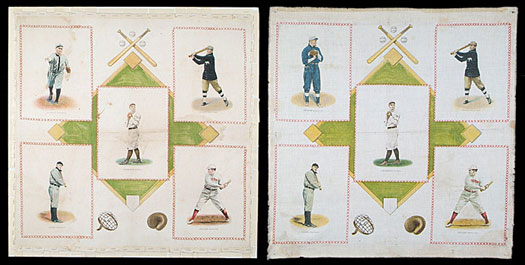 Offered as a single lot are both variations of the classic S110 pillowcase tobacco premium featuring baseball players. These colorful display pieces could be obtained only by mail in exchange for coupons packaged with Helmar and Turkey Red Tobacco. One pillowcase features Christy Mathewson in the center surrounded by "Home Run" Baker, Tris Speaker, Ty Cobb, and Walter Johnson. The other features exactly the same players, except Walter Johnson is replaced with Marty O'Toole. The illustrations of the ballplayers are identical to those used in the S81 premium silk set, and almost identical to those used in the T3 Turkey Red set and the rare L1 Leather set, all of which were part of this same promotion. The pillowcase was the ultimate prize of the promotion, requiring the most coupons in exchange (100 coupons were needed to get a pillowcase). Not only are S110 pillowcases one of the premier tobacco-related display pieces of the era, in the eyes of many advanced collectors they also represent one of the most outstanding values in all of 1910-era tobacco issues. Condition report: The first pillowcase with Johnson has some light staining along the edges, primarily in the lower right (near Speaker) and lower left (near Cobb) corners, and several small relatively unobtrusive tears/holes (mostly along the edges from mounting long ago); the second with O'Toole has some light staining, primarily in the upper left (on O'Toole) and lower left (on Cobb) portions of the pillowcase, and it has been stapled along all four sides to a cardboard backing (mostly likely done when the item was framed for display) which can easily be matted out; still both are very impressive examples in otherwise Very Good to Excellent condition. Dimensions: each 22.5 x 22.5 inches. Total: 2 items. Reserve $1,000. Estimate $2,000/$3,000+. SOLD FOR $2,963