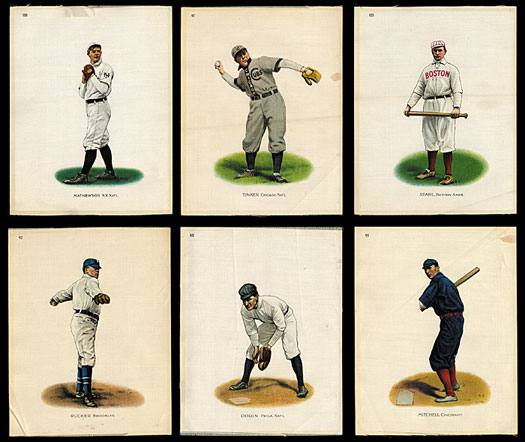 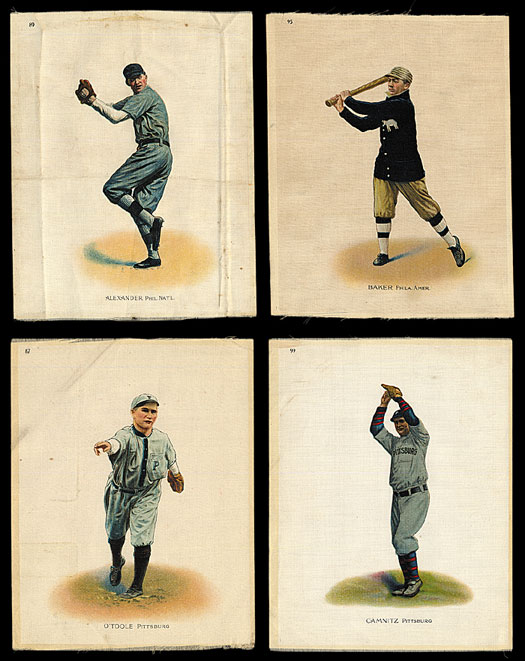 This collection of ten different rare 1912 S81 Silks (out of only twenty-five in the set) consists of Hall of Famers Christy Mathewson, Grover Alexander, Joe Tinker, and Frank Baker, and non-Hall of Famers Howie Camnitz, Red Dooin, Mike Mitchell, Marty Oâ€™Toole, Nap Rucker, and Jake Stahl. It is extremely rare to find such a substantial group of S81s offered as a collection. This group represents 40% of the set and could provide an outstanding foundation for the assembly of a set of these legendary rarities. S81 Silks were issued as special premiums by Helmar Turkish Trophy cigarettes in 1912. The set was part of the very same promotion, which brought us the classic T3 Turkey Red cabinet-card set, and the famous L1 Leathers tobacco-premium issue. Together, these three sets represent the foremost tobacco-premium issues of the era. The silks measure 7 x 9 inches and, with a few exceptions, used the same images featured in the popular T3 Turkey Red cabinet-cards issue. Several years ago a small stack of Christy Mathewson silks were found, but even these have pretty much dried up, and others are all rarer still. Each of the ten S81s offered in this lot is very presentable, but each has various flaws (wrinkles, minor fraying along the edges, etc.). We have graded them individually as follows: #87 O'Toole (Vg to Vg-Ex), 89 Alexander (HOF, Good, soiling and fold lines), 92 Rucker (Ex), 93 Mitchell (stain in the upper right, otherwise Ex), 95 Baker (HOF, Vg), 97 Tinker (HOF, a couple stains on the right edge, otherwise Ex), 99 Camnitz (Vg to Vg-Ex), 103 Dooin (Vg-Ex), 105 Stahl (Ex), and 108 Mathewson (HOF, light stain on the top edge, otherwise Nr/Mt). Total: 10 silks. Reserve $2,500. Estimate $5,000/$10,000. SOLD FOR $9,480