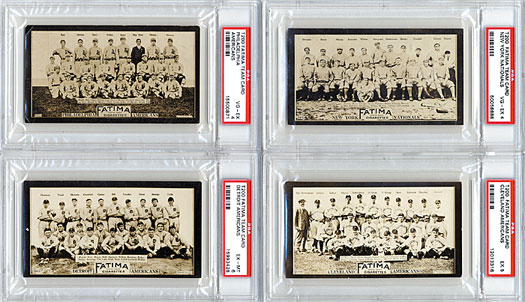 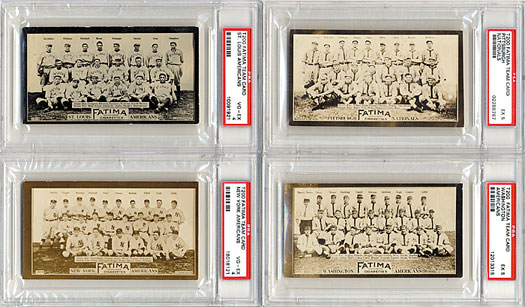 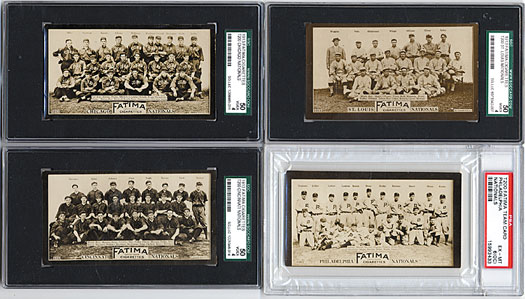 Fatima Cigarettes is responsible for one of the most unusual and distinctive of all tobacco-card issues: the T200 Fatima-team card set. Presented is an extraordinary high-grade complete set of sixteen cards, all graded and encapsulated, thirteen by PSA and three by SGC. Thirteen cards are graded by PSA. Three cards are graded by SGC. If the three SGC-graded cards were submitted to PSA and crossed over to exactly the same grades (which is likely, but as a policy REA does not resubmit or crossover cards), then this set would rank as the number-two complete set on the PSA Set Registry. Assembled one card at a time by our consignor, this is a gorgeous set! T200 Fatima team cards are rarely offered in complete-set form (and much less often than collectors realize, in part because several teams are rare, which make complete sets very difficult to assemble), let alone in such high grade! Do not be fooled by what (for less condition-sensitive tobacco-card sets) might appear to be mid-grades assigned by PSA. These are extremely strong cards throughout and, for T200 Fatima Team cards, these are extremely high grades. The thin stock and fragile real-photo surface of T200 Fatimas makes them very susceptible to light creasing. A tiny little surface crease, which is almost unavoidable for this issue, automatically knocks the grade down to Vg-Ex, even if the card otherwise looks Near Mint. Many collectors consider T200 (and the similarly designed T222 individual-player cards) the single most condition-sensitive sets in all of vintage-card collecting. This is a beautiful and extraordinarily high grade set! As is often the case with T200 Fatimas, these cards look far better than their assigned grades. PSA Condition Report: Two EX-MT 6: Detroit Amer. with Ty Cobb (one of only two graded at this level, with just one graded higher) and Philadelphia Nats (OC). Five EX 5: Brooklyn Nats, Pittsburgh Nats with Honus Wagner, Boston Amer., Cleveland Amer. with Joe Jackson, and Washington Amer. with Walter Johnson. Nine VG-EX 4: Boston Nats, Chicago Nats (SGC VG/EX 50), Cincinnati Nats (SGC VG/EX 50), New York Nats with Christy Mathewson and Jim Thorpe, St. Louis Nats (SGC VG/EX 50), Chicago Amer., New York Amer., Philadelphia Amer., and St. Louis Amer. T200 Fatimas is a set which is not practical to collect in Mint condition. In fact, there has never been a T200 Fatima graded Mint by PSA and 82% of all graded examples have been between Poor and Vg-Ex, with almost all others Ex (fewer than five-percent in higher grades, including just one Nr/Mt-Mt). This set is also just beginning to be appreciated for its combination of rarity, unusual design, photographic quality, and the exceptional value they represent compared to other far more common tobacco-card issues of the era. SMR values appear very reasonable compared to actual selling prices. The SMR value for the assigned grades (not including the one qualified card) is $11,100. Total: 16 cards. Reserve $2,500. Estimate $5,000/$10,000+. SOLD FOR $11,258