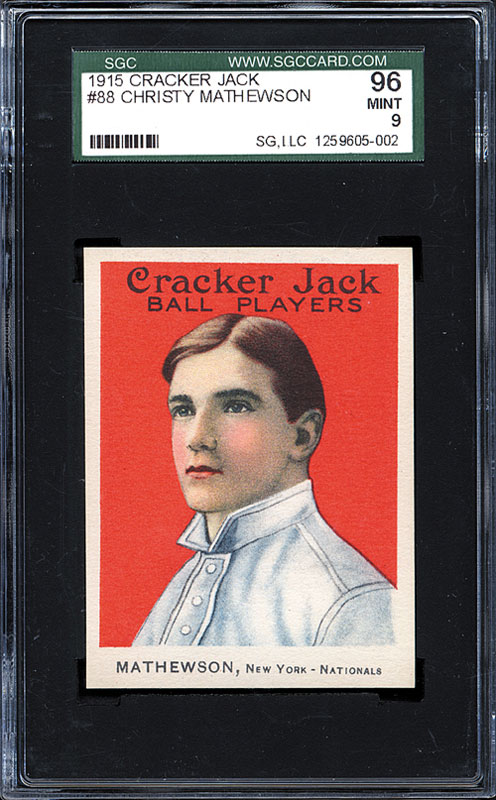 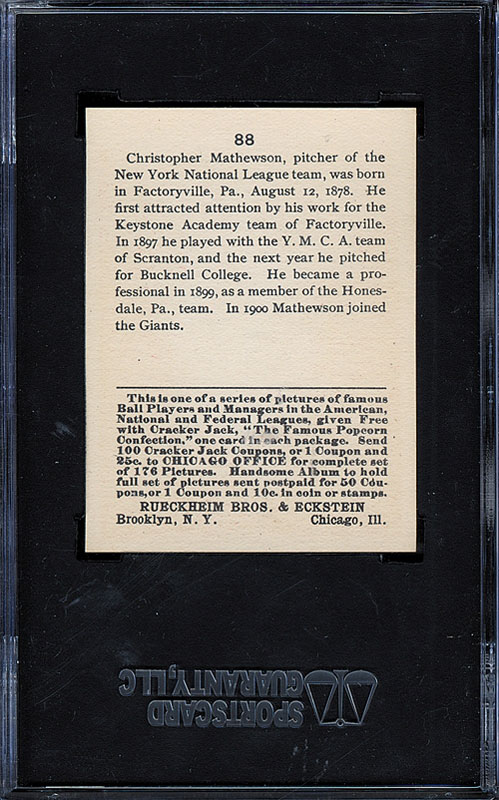 Graded MINT 96 by SGC. Highest-graded example with only one other graded at this extraordinary level (none higher)! This is a simply stunning and breathtaking ultra high-grade example of Christy Mathewson from the 1915 Cracker Jack series. This is the finest example of this card we have ever offered or even seen. The 1915 Cracker Jack, featuring a majestic portrait of the legendary Hall of Famer, has always been recognized as one of Mathewsonâ€™s most striking and popular cards. In the eyes of many collectors, it is the single best Mathewson card ever produced. It is one of the great classics in all of vintage-card collecting. In this unbelievable condition, it is all the more incredible. The card is perfectly bright and clean, both front and back, with flawless color, a striking red background, perfect registration, four razor-sharp corners, and virtually perfect centering. The reverse is also crisp and clean. Obviously a perfectly preserved factory-set example: we're not exactly sure how this card could be any better. 1915 Cracker Jacks will always be one of the most highly prized and widely collected of all prewar sets. Mathewson is one of the key cards in the set, along with Cobb, Jackson, Johnson, and Wagner. This is an extraordinary high-grade 1915 Cracker Jack example of Christy Mathewson, literally one of the finest examples in the universe, of one of vintage-card collecting's greatest classics. The equivalent SMR value for the assigned grade is $32,500. Reserve $10,000. Estimate $20,000+. SOLD FOR $41,475