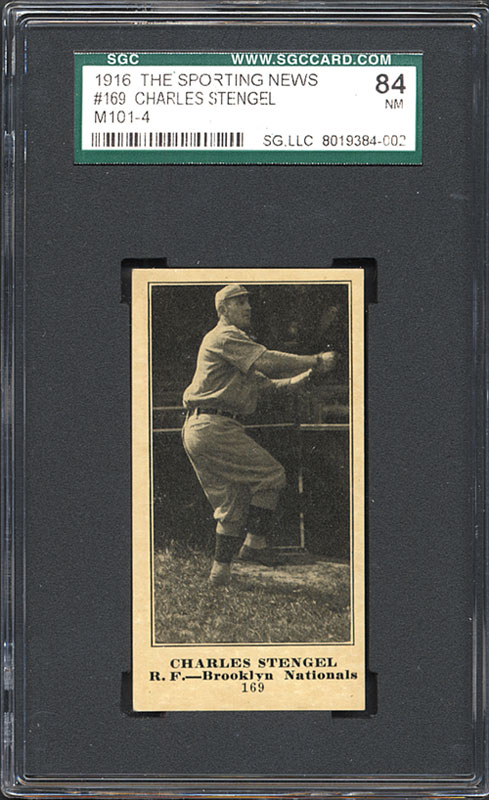 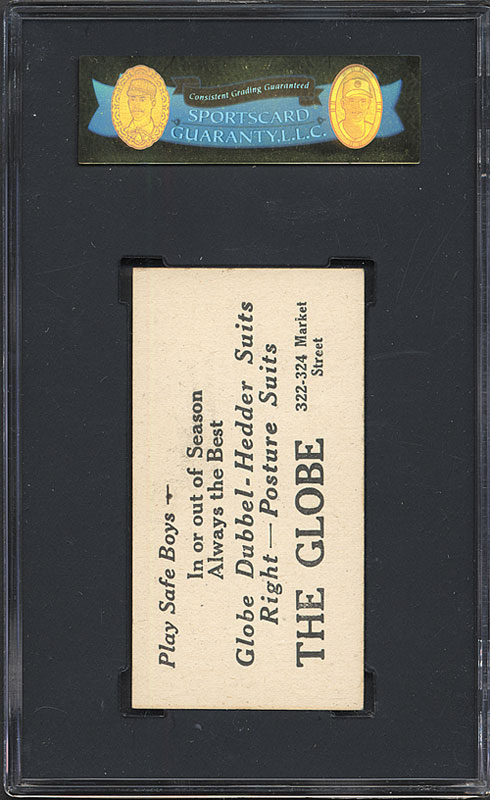 Graded NM 84 by SGC. Highest-graded example! Gorgeous high-grade example featuring Hall of Famer Casey Stengel in a throwing pose, on one of the very few cards of Stengel featuring him as a player. This is one of Casey Stengel's most desirable cards and it is very rarely offered, especially in such outstanding condition. The Casey Stengel is a fascinating and yet slightly overlooked card. Stengel appears in the 1910 T210 Old Mill Tobacco set as a minor leaguer, and his T210 card understandably generates a tremendous amount of attention, but this Globe Clothing Store card is also of enormous significance as his first card as a Major Leaguer. The 1916 H801-9 Globe set is identical to M101-4 Sporting News except for the different advertisement on the reverse. Though M101-4s are listed in the American Card Catalog as being issued with various backs, Jefferson Burdick elected to assign the Globe Clothier store backs their own catalog number (H801-9). This stunning example is perfectly bright and clean, with a flawless surface, outstanding contrast, four sharp corners (a hint of light wear in the lower left), and almost perfect centering. The reverse has the "The Globe" advertisement boldly printed in black. This is a superb high-grade example of Casey Stengel from the H801-9 Globe Clothiers set. This card would be a significant addition to any world-class vintage card, rookie, or Hall of Fame baseball-card collection. Reserve $300. Estimate $500/$1,000++. SOLD FOR $1,422