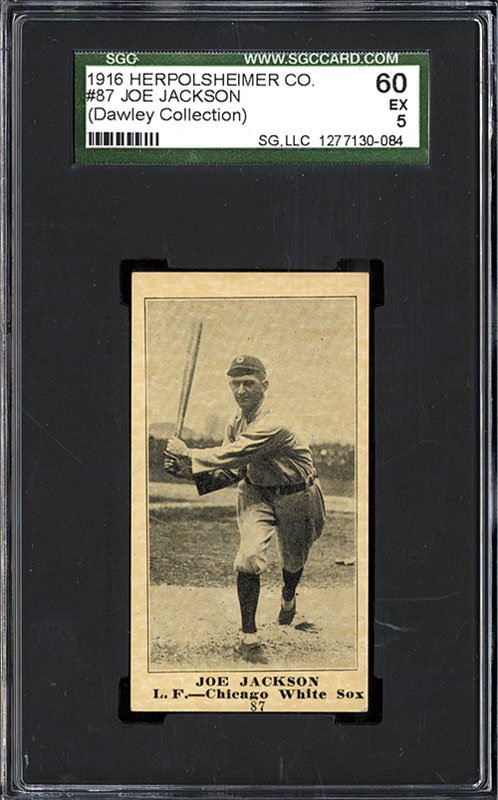 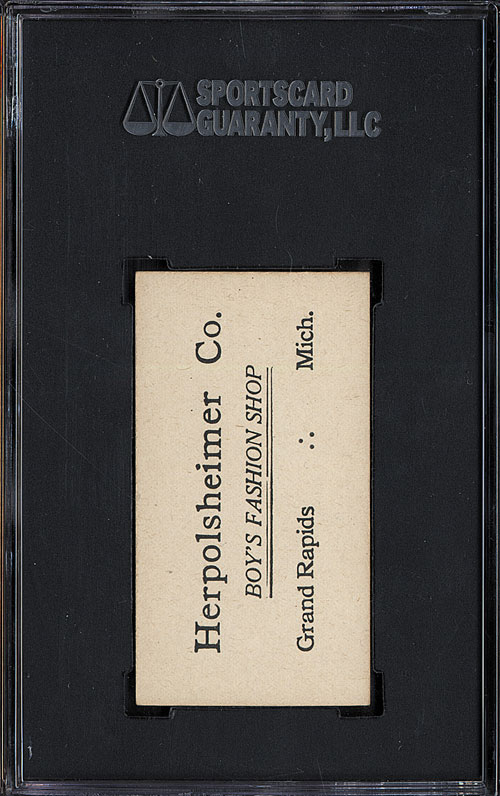 Graded EX 60 by SGC. Highest-graded example by SGC. This is an extremely rare M101-4 variety of #87 Joe Jackson. The 1916 Herpolsheimer's set is very similar in design to M101-4 and M101-5 Sporting News, but with advertising on the reverse for the "Herpolsheimer Co. â€“ Boyâ€™s Fashion Shop â€“ Grand Rapids â€“ Mich." This card was saved by the grandfather of our consignor. His family originally lived in Grand Rapids, Michigan, and his grandfather personally got this card in 1916 directly from the Herpolsheimer Company. This is one of just a few cards that we have separated from the balance of the crisp, uncirculated set to be offered individually. The M101-4 Jackson is an extremely noteworthy card to vintage collectors. Despite playing for thirteen years before his banishment, Joe Jackson appears in very few card sets. He missed being included in the T206 series, and was banished from baseball in 1920 just before the release of the American Caramel and related issues of 1921. This card features Jackson in a classic batting-pose photograph by Charles Conlon, which is the same photograph used to produce his Cracker Jack card. This is an outstanding and extremely attractive example in all respects. A strong case can be made that it is very conservatively graded. It has no creases. The front and back are both perfectly clean. The image is bright and crisp. The corners are sharp with just the slightest hint of wear. The card appears to have been downgraded to EX 60 by SGC strictly because of the extremely low centering and an ever-so-slight natural diamond cut. It is otherwise in Nr/Mt condition. The reverse advertisement for Herpolsheimer Company is bold and crisp. This is a very attractive example of an extreme advertising back rarity and would be a worthy addition to any world-class Joe Jackson or rare vintage baseball-card collection. Reserve $1,500. Estimate $3,000/$5,000. SOLD FOR $6,518