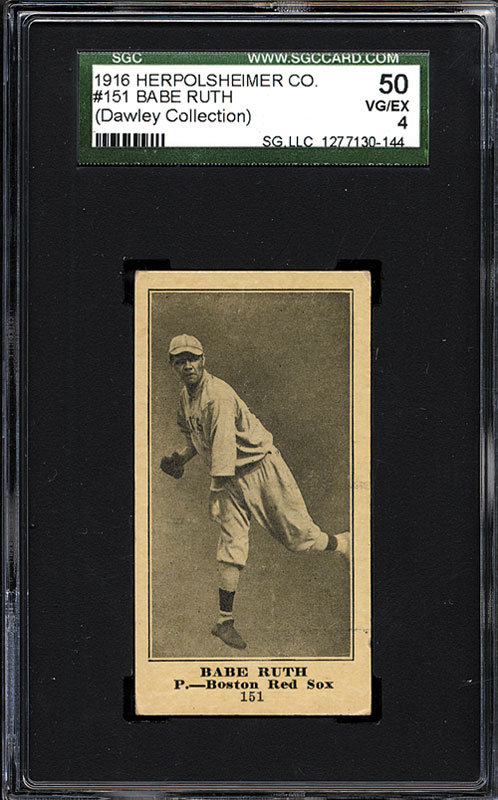 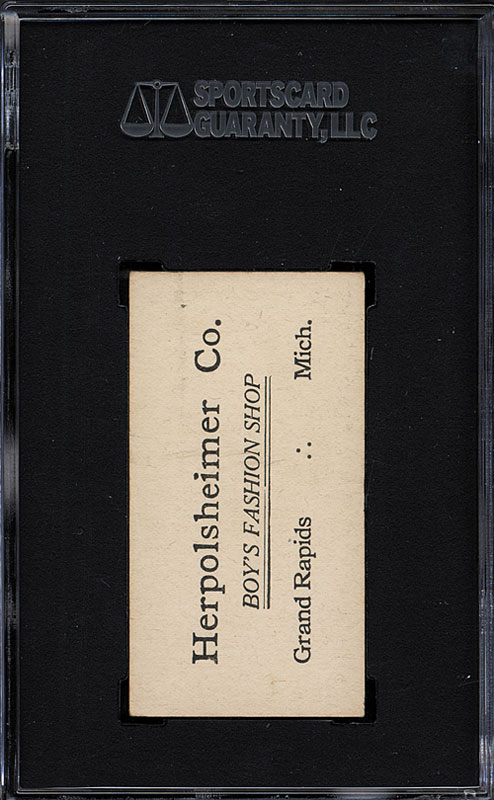 Graded VG/EX 50 by SGC. Presented is an extraordinary example of the M101-4 #151, Babe Ruth's rookie card. This card (and set) is usually referred to as issued by The Sporting News , but the M101-4 set was actually issued with a variety of advertising backs as well as with blank backs. This particular example is an extremely rare M101-4 variety of Babe Ruth's rookie card, featuring advertising for Herpolsheimer's clothing store on the reverse ("Herpolsheimer Co. â€“ Boyâ€™s Fashion Shop â€“ Grand Rapids â€“ Mich."). This card was saved by the grandfather of our consignor. His family originally lived in Grand Rapids, Michigan, and his grandfather personally got this card in 1916 directly from the Herpolsheimer Company. The Babe Ruth rookie is one of just a few cards that we have separated from the balance of the crisp, uncirculated set to be offered individually.

This is a stunning example of Babe Ruth's rookie card, universally regarded as one of card collecting's most recognizable and highly prized baseball-card rarities. It would be hard for a piece of cardboard to better symbolize the history, the essence of American sport, than this 1916 rookie card of Babe Ruth. Ruth had only pitched in four games with Boston in 1915 but fortunately impressed the card manufacturer enough to warrant inclusion in this major issue. The distinction between the rookie status of the M101-4 and M101-5 Ruth cards, which feature the very same image and card number, has been blurred since it has been discovered that both sets were actually issued in 1916. It is our opinion that both equally qualify as Ruth's first Major League card. (Note: The 1914 Baltimore News card of Ruth featuring him as a minor leaguer, of course, predates both the M101-4/5 issues.) The rookie card of Babe Ruth is one of the most significant cards in all of card collecting. Most are blank-backed. Examples with the Herpolsheimer advertising reverse are particularly rare. This is one of only two M101-4 Herpolsheimer Babe Ruth examples ever graded by SGC (the other is NM 84). The PSA population report also records only two examples (one FR-GD, one NM; the NM 7 example appeared as lot 16 in REA's May 2010 sale and sold for $82,250). This is an outstanding and extraordinary card in all respects. It has no creases. The front and back are both clean. The image is bright and crisp. The contrast is flawless. It is very well centered (especially for this card, which is often plagued by serious centering problems), just a hint to the left. The card has been downgraded by SGC because of a little too much wear on the square corners and two minor print marks related to the manufacturing process on the right border. It is otherwise in Ex-Mt condition. The reverse advertisement for Herpolsheimer Company is bold and crisp. Newly discovered and direct from the family of the original owner, this is an extremely striking high-grade example of one of the most significant and highly prized of all baseball cards. Reserve $10,000. Estimate $25,000+.
SOLD FOR $77,025