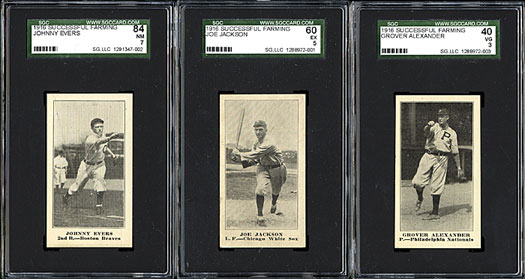 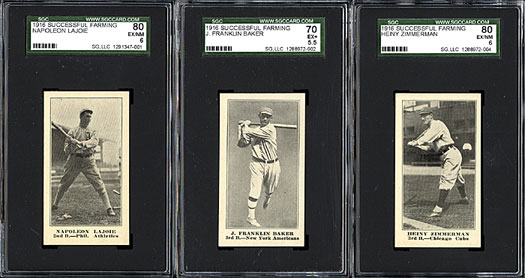 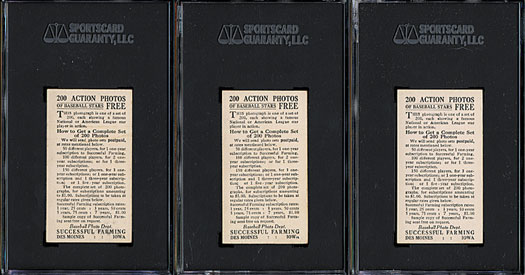 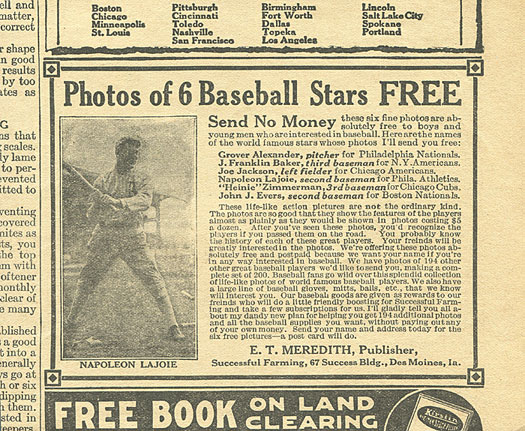 Presented is an extraordinary newly discovered and unique complete set of six special promotional 1916 M101-5 Successful Farming cards. This is a remarkable find. The six cards presented here are the first examples from this unique set that we have ever seen. We were previously entirely unaware of their existence. We were not alone! When we first received scans of these cards, which were part of a 650-card original-owner collection (that also included cards from sets such as Zeenuts, D311 Pacific Coast Biscuit, E100 Bishop & Co., Colgan's Chips, T205, and T206, among others), we were very puzzled by the four M101-5 Successful Farming cards. All Successful Farmin g cards are rare (Successful Farmin g is one of the rarest of all M101-4/5 advertising backs), but what puzzled us about these cards in particular was that they were designed differently from all other M101-4/5 cards (with any advertising backs) that we had ever seen before. They had no card numbers at the bottom. We did not know what to make of them. No one else seemed to know anything about them either. Finally, we had the good fortune to communicate with card-collecting scholar Todd Schultz, who along with fellow collector Tim Newcomb, authored the most definitive article ever written about the M101-4/5 set in Issue #16 (Summer 2008) of Old Cardboar d magazine.

We sent Todd scans of the four cards (Joe Jackson, Grover Alexander, Frank Baker, and Heinie Zimmerman) and asked him if by chance he was familiar with this unusual variety of M101-5 Successful Farmin g cards. We were shocked by his response: He WAS familiar with the issue, but only in theory. Years earlier, he had seen one single similarly designed example (a low-grade Alexander). His research eventually uncovered an advertisement in Successful Farmin g magazine that potentially explained the unusual Alexander card. The ad offered a special promotional set of six Successful Farmin g cards to anyone sending their name and address and requesting a set. The six players in the set were listed and an example of Lajoie (designed with no number) was pictured in the ad. Armed with this information, Todd told us that there should be two others (in addition to the four we had): Lajoie and Evers. We called our consignor (a noncollector) to ask if by chance, there could possibly be any others that were not sent to us, and he told us that yes, there were two others! One he had kept as a souvenir (Johnny Evers), and the other stumped him for a moment; but then he remembered that years earlier he traded a few cards to a friend as a favor, in thanks for assistance in helping to catalog his cards. He called the friend and found that he indeed did have one more card (which, of course, just as Todd Schultz had told us, was Lajoie!). Our consignor explained to his friend the unusual circumstances, and the sixth card was immediately reunited with the other five to complete the set. To us, everything about this was a card-collecting miracle!

This incredible find, combined with Todd Schultz's research and generous assistance, solves the mystery of these cards and allows the existence of the set to be confirmed. The six cards offered in this lot represent the complete set of all six of the special promotional cards distributed as a one-time free giveaway offered in a single advertisement on page 45 of the May 1916 edition of Successful Farmin g, a popular farming magazine. It is also interesting to note that our consignor obtained these cards decades ago directly from the original owner, a gentleman by the name of Mel Irving, who was an apple farmer! This is a fascinating additional note as it explains why Mr. Irving would happen to subscribe to Successful Farmin g and, as an avid card collector, why he responded to the ad in May 1916.

This is an exciting find with a fascinating story. We know we could break the set up and maybe get more, but we do not have the heart to do it. Our consignor is in full agreement. Finding these cards, unlocking their mystery, and reassembling the set were a thrill for us and for our consignor as well. We hope you have enjoyed reading about the set. We had a lot of fun working on it! These are six of the seven known examples from the set. Others may surface in the future but to date, this is certainly the only known complete set of this extremely rare and significant issue. Total: 6 cards. Reserve $5,000. Estimate (open). SOLD FOR $26,663