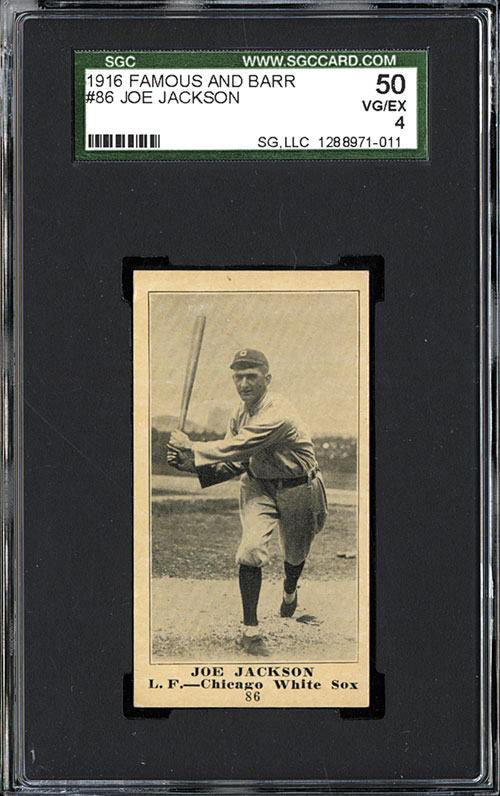 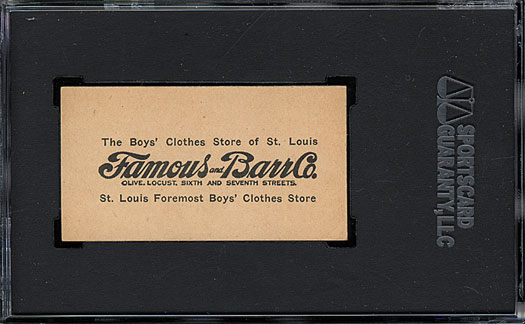 Graded VG/EX 50 by SGC. Rare M101-5 variety of #86 Joe Jackson with Famous & Barr advertising reverse. The 1916 Famous and Barr set is identical in design to M101-4 and M101-5 Sporting News, but with advertising on the reverse for the "The Boysâ€™ Clothes Store of St. Louis - Famous and Barr Co. â€“ St. Louis Foremost Boysâ€™ Clothes Store." The St. Louis-based Famous & Barr Company was one of several regional advertisers to issue both the M101-4 and M101-5 series cards, and almost all Famous & Barr examples known are M101-5s. This card was saved by the father of our consignor. Her family originally lived in St. Louis, Missouri, and her father personally got this card in 1916 directly from the Famous and Barr Company! This is one of just a few cards that we have separated from the balance of a crisp, uncirculated collection to be offered individually. The significant rarity of this card is confirmed by the fact that only six (including this one) Famous & Barr Joe Jacksons have ever been graded by PSA and SGC (for reference, the grades of the other five examples are one SGC VG/EX 50, two SGC GOOD 30s, and two PSA EX 5s). The card features Joe Jackson in a classic batting-pose photograph by Charles Conlon, which is the same photograph used to produce his Cracker Jack card. This is a stunning Vg-Ex example, with tremendous eye-appeal, of one of the most significant of all baseball cards. The front and back are both perfectly clean. The image is bold and crisp, and centered slightly to the right. The corners are square with just a hint of light even wear (predominately the lower left). The card has been downgraded to VG/EX 50 by SGC strictly because of a tiny diagonal crease in the upper left corner. It is otherwise in Ex-Mt condition! The reverse advertisement for Famous and Barr Co. is bold and crisp. This is a very attractive example of an extreme rarity and would be a worthy addition to any world-class Joe Jackson or rare vintage baseball-card collection. Reserve $1,000. Estimate $2,000/$3,000+ . SOLD FOR $4,148