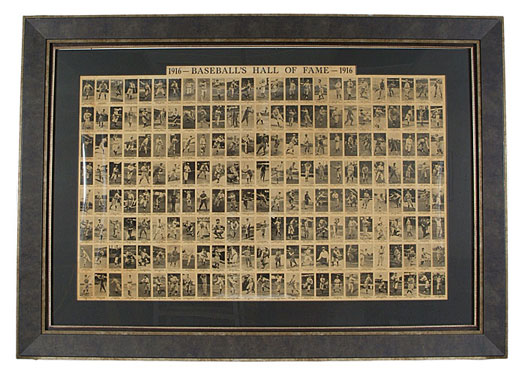 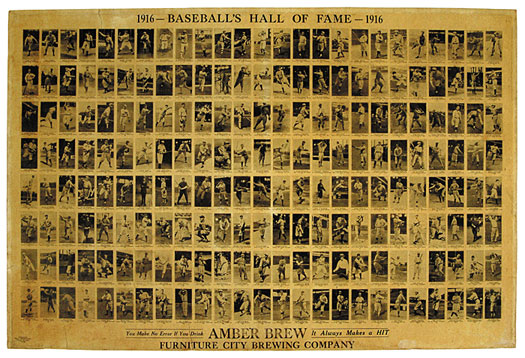 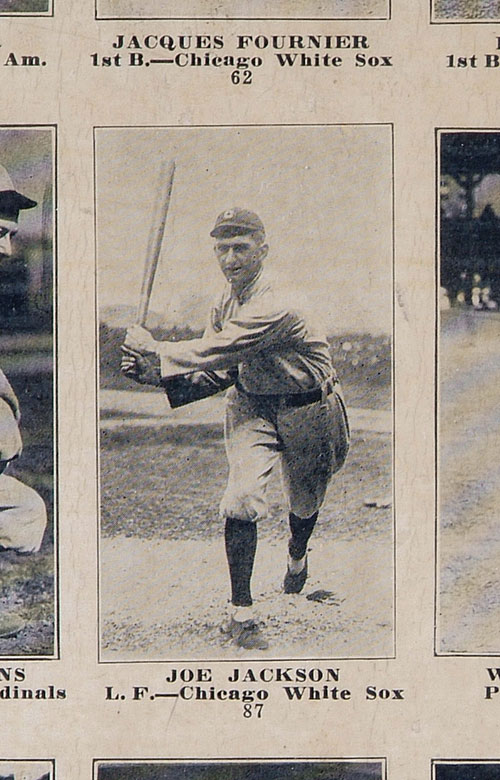 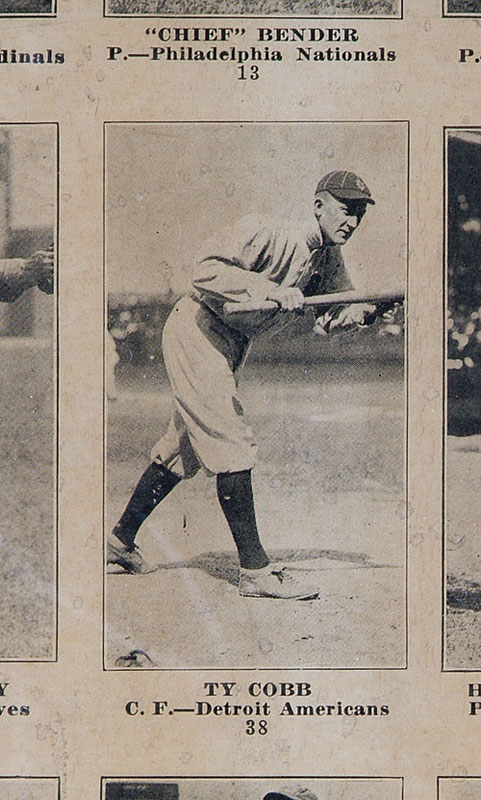 Offered is a complete set of one of the most highly regarded and widely collected baseball-card sets of the era, the 1916 M101-4 set of 200 cards, on an uncut sheet. This uncut sheet originally appeared as Lot 248 in REA's April 2005 auction, and sold for $19,720. The sheet has been consigned directly from the buyer at that auction. This sheet was discovered by a (noncollector) family in Grand Rapids, Michigan, when cleaning out the family home, where it had been stored away by a family member since the time of issue. Furniture City Brewing Company, the firm which issued this sheet, was in 1916 located just blocks away from the home in which the sheet was found. This is a remarkable uncut sheet featuring one of the premier card sets of the era, including Babe Ruth's rookie card, which has continued to rise in status over the years.

The M101-4 set is highlighted by Babe Ruth, Joe Jackson, Honus Wagner, and Ty Cobb, and includes all the top stars of the day. Hall of Famers and key stars that appear in the set include #4 Grover Alexander, 9 Frank Baker, 10 Dave Bancroft, 13 Chief Bender, 17 Mordecai Brown, 28 Max Carey, 32 Eddie Cicotte (Black Sox), 34 Eddie Collins, 36 Charles Comiskey, 38 Ty Cobb, 41 Sam Crawford, 54 Johnny Evers, 55 Urban Faber, 56 Hap Felsch (Black Sox), 64 Chic Gandil (Black Sox), 72 Clark Griffith, 84 Harry Hooper, 86 Miller Huggins, 87 Joe Jackson (Black Sox), 90 Hugh Jennings, 91 Walter Johnson, 97 Napoleon Lajoie, 107 Connie Mack, 112 Rabbit Maranville, 113 Rube Marquard, 116 John McGraw, 142 Eppa Rixey, 144 Wilbert Robinson, 146 Ed Roush, 151 Babe Ruth, 154 Ray Schalk, 164 George Sisler, 169 Casey Stengel, 174 Joe Tinker, 182 Honus Wagner, 184 Ed Walsh, 186 Buck Weaver (Black Sox), and 188 Zach Wheat. The M101-4 set is commonly referred to as issued by Sporting News , but as most collectors know, the set was actually issued by many different companies, including Sporting News . Some of these regional issuers placed their advertising on the reverse of the cards, others left the backs blank. Collectors traditionally refer to blank-backed examples as Sporting News , though it is not possible to identify with certainty the issuer of the blank-backed cards. The offered set of 200 cards in original uncut form is accompanied by advertising on the extra large bottom margin for the Furniture City Brewing Company. In the lower left corner of the sheet is the printer's credit, which reads, "Published by Felix Mendelsohn, Peoples Gas Bldg., Chicago." Apparently the extra text above and below the cards was added by the printer so that a number of uncut sheets could be used, if desired, for display at Furniture City Brewing, or for use as advertising displays in bars. We will never know for certain whether any uncut sheets were ever displayed at Furniture City Brewing or at retail establishments. The stock of the cards on the sheet is the same sturdy card stock on which all M101-4 cards are printed. The backs, like most M101-4 cards, are blank.

There are very few sheets of baseball cards that have survived from the teens or before. The number of known sheets (or even partial sheets) from this era can literally be counted on one hand. This M101-4 sheet of 200 cards is both the largest and most substantial of all of the very few surviving uncut sheets of baseball cards from this era. The fact that it is such a key set of the era, and one of the very few sets which includes virtually all Major League players of the day, make this one of the most significant of all uncut baseball-card sheets. The set alone lists in the Standard Catalog at $65,000 in Nr/Mt condition. High-grade examples routinely sell at far higher levels. For example, the SMR for #151 Ruth in PSA NM-MT 8 lists for an astounding $250,000. The SMR for #87 Jackson in PSA NM-MT 8 is $32,000. Of course, there has never been a formula for determining the value of uncut sheets. Large sheets naturally have many opportunities for imperfections. When found, this sheet was mounted onto a backing board for framing. The board was buckling and the sheet did not lie flat. The sheet was sent to the master restorers at Graphic Conservation in Chicago to perfectly remove the sheet from the backing, allowing it to lay flat, and to provide restoration to a few distracting flaws, including a surface scratching surrounding a single card (#157) which has been repaired, and several margin tears affecting perimeter cards (including Ruth which is still a beautiful card) which have been reinforced (which have purposefully not been repaired to be undetectable, though they could be if desired). This minor work has enhanced the extraordinary visual appeal of the sheet without compromising its integrity. The sheet now lies perfectly flat, allowing it to display beautifully as intended. Graphic Conservation is the most highly respected paper restoration company in the world. While they do not specialize in baseball collectibles, they have repaired and restored literally hundreds, perhaps thousands, of baseball cards and baseball display pieces for major auction houses and collectors over the years. While REA does not offer restoration services, in very rare instances (approximately six times over the past 40 years) when we have deemed it appropriate, we have always used Graphic Conservation as it is the best in the field, and can be trusted to maintain the integrity of the piece if properly instructed, as they have been, of course, in this case. The sheet has minor flaws but displays beautifully, with an overall Very Good to Excellent appearance. This is an extremely impressive display piece, featuring 200 cards, representing a complete set of one of the most important baseball card issues of the era. Professionally framed and matted to total dimensions of 52.5 x 37 inches. Reserve $10,000. Estimate $20,000+. SOLD FOR $47,400