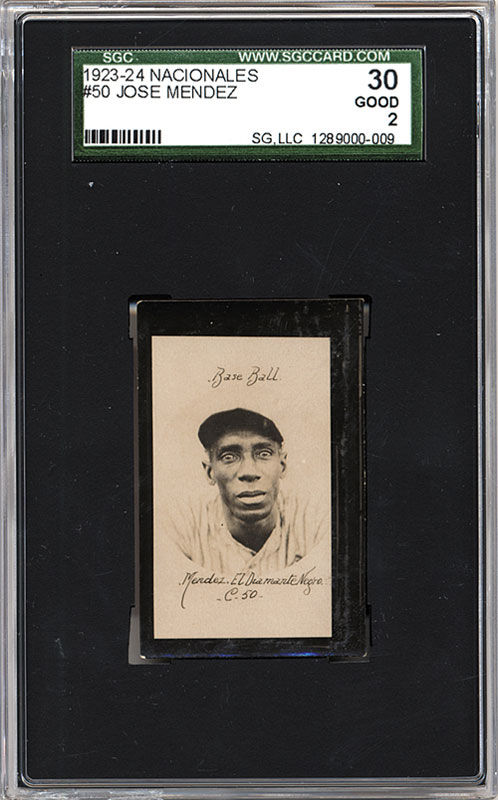 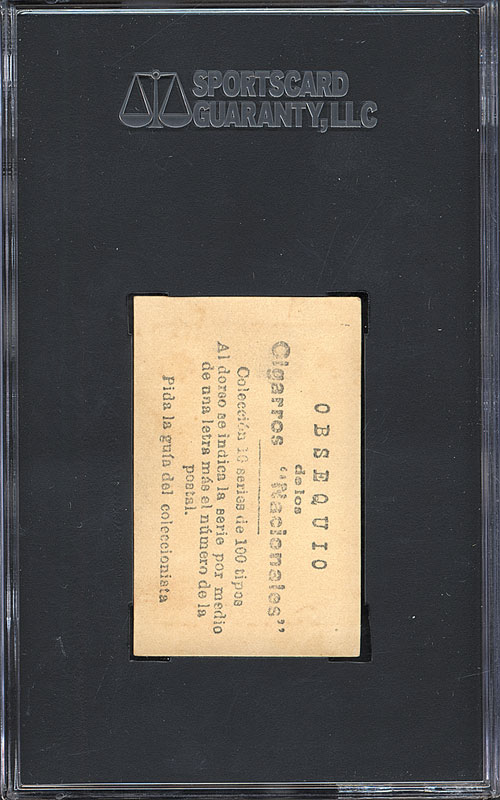 Graded GOOD 30 by SGC. 1923-1924 Nacionales Tobacco card of Hall of Famer Jose Mendez. One of the rarest of all Cuban card issues is the Nacionales Tobacco set issued in 1923-1924. Of special note: this set features many Negro Leaguers who played in the Cuban Winter League, including several major Negro League stars who appear in very few sets. Offered is one of the key highlight cards from this rare set, one of only several examples known to exist of Jose Mendez, featuring him as a member of the "Santa Clara B.B.C." Nacionales cards feature striking real-photo style images with advertising on the reverse. Mendez is considered by most historians to be the greatest pitcher in Cuban baseball history. He earned the nickname "El Diamante Negro" (The Black Diamond) by his countrymen, which appears prominently on the front of this card. This outstanding rarity is exceptionally clean and attractive, with superb photo quality (which can vary from card to card in this series). The corners are square with just a hint of wear, and the image is centered slightly towards the bottom left. Technically graded Good due to very light and insignificant evidence of scrapbook removal on the reverse (related to how these cards were saved in albums), otherwise the card has a far superior Excellent appearance. This is a very attractive high-grade example of this extremely rare issue featuring one of the all-time great Negro League Hall of Famers. Difficult to value in any condition due to its extreme rarity. An outstanding example of one of the few cards ever issued of Jose Mendez, who was elected to the Hall of Fame by the Negro Leagues Committee in 2006, which naturally gives this card a special significance to HOF collectors. This is the first example of this extremely rare and significant card of Jose Mendez that we have ever offered. Reserve $500. Estimate $1,000/$2,000+.
SOLD FOR $3,555