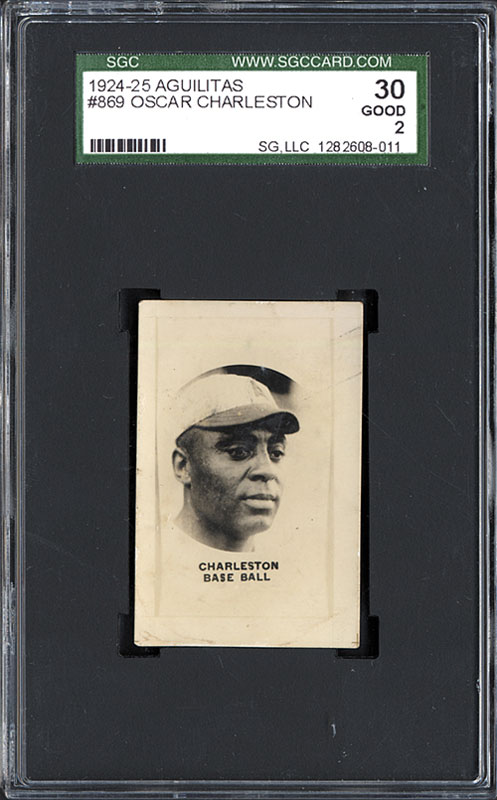 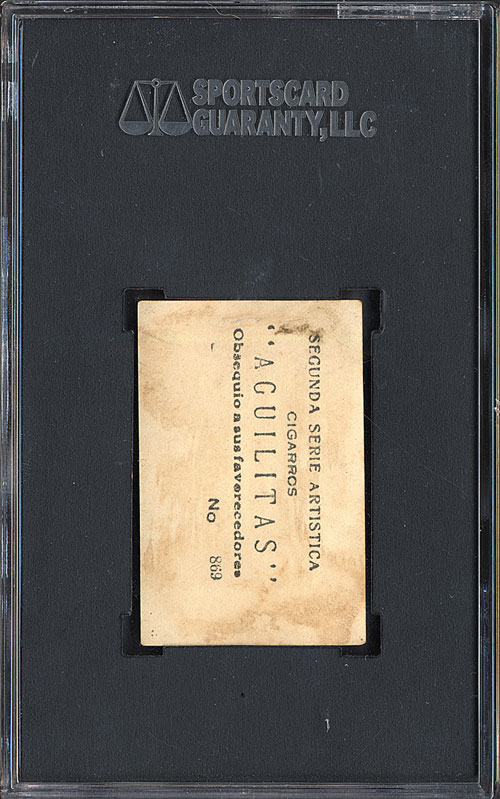 Graded GOOD 30 by SGC. Extremely rare 1924-1925 Aguilitas Segundas tobacco card of Hall of Famer Oscar Charleston. This is an extraordinary card, with perfect contrast, and, as can easily be seen, an appearance far superior to its SGC-assigned technical grade. One of the rarest of all Cuban card issues is the Aguilitas Segundas tobacco set issued in 1924-1925. Of special note, this set featured many Negro Leaguers who played in the Cuban Winter League, including several major Negro League stars that appear in very few sets. Offered is the key highlight card from this rare set, and one of only a handful of known examples of Oscar Charleston, featuring him as a member of the "Almendares." These cards feature striking real-photo style portrait images with advertising on the reverse. Charleston hit .361 lifetime during his nine years playing baseball in Cuba. His career in the Negro Leagues spanned forty years with fourteen different teams, as a player and manager, beginning with the Indianapolis ABC's in 1915 during the dead-ball era, and ending in 1954 upon his death, at which time he was managing the Indianapolis Clowns in the fading post-integration years of the Negro American League. Charleston played with many of the greatest teams in the history of the Negro Leagues, and is credited with a .357 lifetime average. He is considered by most historians to be the best player in Negro League history. Elected to the Hall of Fame in 1976. This outstanding rarity is exceptionally clean and attractive, with superb photo quality (which can vary from card to card in this series), no creases, and centered slightly to the left. The reverse is clean with just a hint of staining (probably from long ago being glued into an album and later removed, which is often seen with this issue) and bold black print. In all our 40 years, this is only the third example of this extremely rare and significant card of Oscar Charleston that we have ever offered, and it is the best. (The other two examples, in lesser grade, appeared as Lot 507 in REA's May 2008 auction, realizing $5,287, and as Lot 605 in REA's May 2011 auction, realizing $8,225.) Reserve $2,500. Estimate $5,000+.
SOLD FOR $8,888