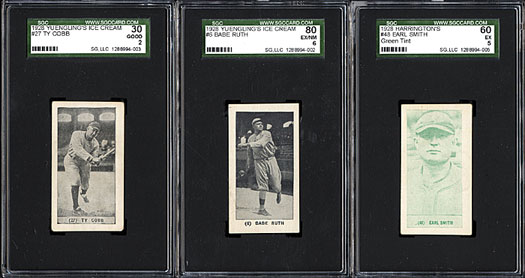 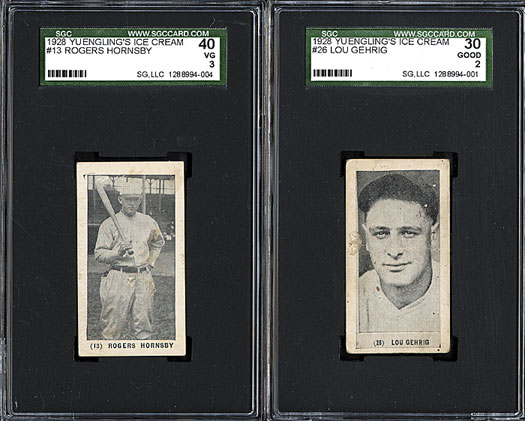 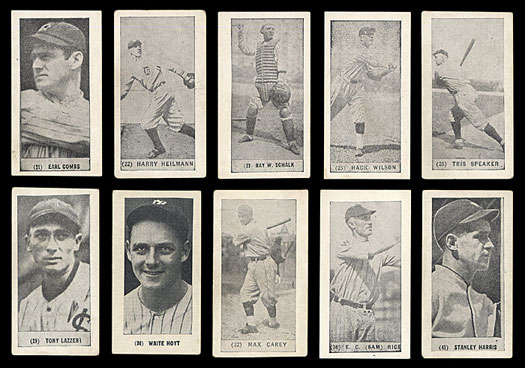 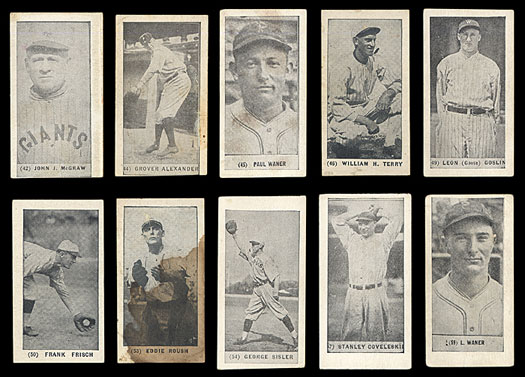 Complete set of sixty 1928 F50 Yuengling's Ice Cream cards, including an incredible thirty-three Hall of Famers highlighted by Babe Ruth, Lou Gehrig, and Ty Cobb, and also the extremely rare Earl Smith green tint variation (Harrington's Ice Cream back, one of only five known). Many collectors believe that the #48 Earl Smith card was intentionally made rare to keep children from getting a costly prize as detailed on the back of each card. The back of each card informs youngsters that a complete set of all sixty cards could be exchanged for a free gallon of ice cream! Judging from the extreme rarity of #48 Earl Smith, combined with the fact that this one card is so different from all other cards in the set (being printed in green-and-white as opposed to black-and-white) strongly suggests that legend probably has great merit. This is an extremely rare set! In fact, this is the first complete set of F50 Yuengling's Ice Cream cards that we have ever offered and the first example of rare card #48 Earl Smith we have ever seen! Yuenglings are well known by advanced collectors both for their rarity and memorable product name, as well as for being one of the very few card sets issued during the late 1920s. The Yuengling's Ice Cream set is identical in design to several other contemporary sets (Harrington's, Tharpâ€™s, Sweetman, etc.), but with advertising for Yuengling's Ice Cream on the reverse. This set has been consigned by the family of one of the hobby's great pioneer collectors who assembled the set decades ago in the early days of organized collecting. Five cards are graded and encapsulated by SGC (all submitted by REA). Keys: #1 Grimes (Vg), 4 Faber (Ex), 5 Hartnett (Fr), 6 Ruth (SGC EX/NM 80), 8 Pennock (Gd), 10 Sewell (Ex), 13 Hornsby (SGC VG 40), 14 Traynor (Ex), 16 Rixey (Vg-Ex), 19 Bancroft (Ex), 20 Kelly (Vg-Ex/Ex), 21 Combs (Ex), 22 Heilmann (Vg), 23 Schalk (Ex), 25 Wilson (Ex-Mt), 26 Gehrig (SGC GOOD 30), 27 Cobb (SGC GOOD 30), 28 Speaker (Vg-Ex), 29 Lazzeri (Vg), 30 Hoyt (Vg/Vg-Ex), 32 Carey (Vg-Ex), 36 Rice (Ex-Mt), 41 Harris (Vg-Ex), 42 McGraw (Gd), 44 Alexander (Pr), 45 P. Waner (Gd), 46 Terry (Vg-Ex, Tharp's Ice Cream), 48 Smith (SGC EX 60, extremely rare green tint variation, one of only approximately five known), 49 Goslin (Ex), 50 Frisch (Ex), 53 Roush (Pr, Tharp's Ice Cream back), 54 Sisler (Vg-Ex/Ex), 57 Coveleski (Vg-Ex), and 59 L. Waner (Gd). The balance of the cards range from Vg to Ex (with a few slightly lesser). The modest production quality of most cards in this era (being black-and-white as opposed to the color bubble-gum cards issued in the 1930s) have kept these 1920s classics relatively affordable. Their rarity, the inclusion of so many Hall of Famers, the fact that there are so few quality issues dating from the 1920s, and the excellent value they represent have earned them a growing appreciation among advanced collectors in recent years. Yuengling's is one of the most substantial sets of the late 1920s. The set is normally considered complete at fifty-nine cards due to the extreme rarity of #48 Earl Smith (just as a T206 set is usually referred to as "complete" without Wagner, Plank, or the rare Doyle). The Standard Catalog does not list a value for Smith, instead reading simply "Printed in green only. Value Undetermined." This is an exceptional complete set (including #48 Earl Smith) of these distinctive and rare 1920s cards. Total: 60 cards. Reserve $2,500. Estimate $5,000++. SOLD FOR $10,073