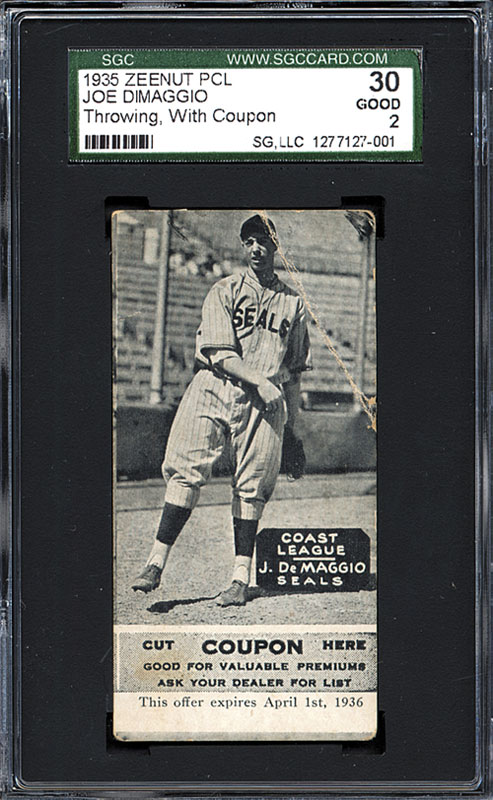 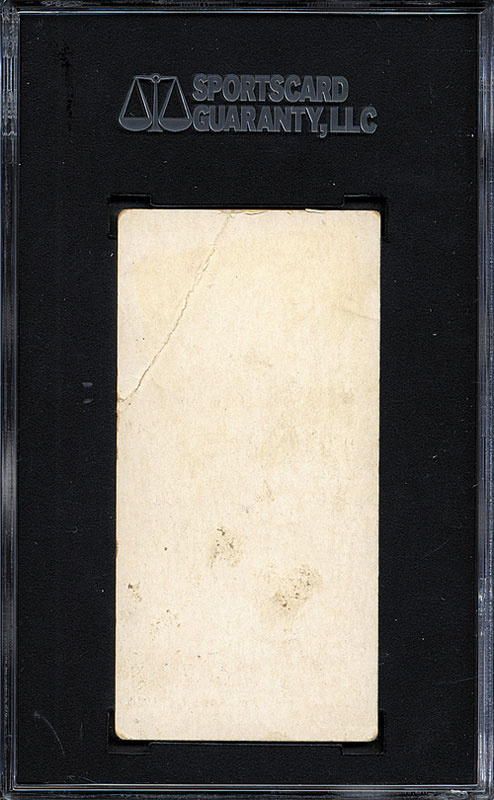 Graded GOOD 30 by SGC. Only the third 1935 Zeenut of DiMaggio with the coupon still attached ever graded by SGC or PSA. Presented is an extremely significant rarity that is one of the all-time great baseball cards: Joe DiMaggio's second-year card. This card was issued in the 1935 Zeenut series of Pacific Coast League players. Zeenut was a brand name of the San Francisco based Collins-McCarthy Candy Company, and from 1911 to 1938, it annually issued cards of Pacific Coast League players with its products. Joe DiMaggio, of course, first made his debut in professional baseball with the San Francisco Seals of the PCL, and he appeared on Zeenut cards in both 1934 and 1935. This is his 1935 throwing-pose card, the second baseball card ever issued of DiMaggio, years before he joined the Yankees. (On his 1934 Zeenut card DiMaggio is featured batting.) Almost all Zeenuts are found with the coupon at the bottom neatly clipped away, which is understandable as the coupons were intended to be redeemed for valuable prizes, but this extraordinary example is complete with the original coupon intact. One of the interesting aspects of DiMaggioâ€™s Zeenut cards is the spelling of his name. When DiMaggio joined the San Francisco Seals team, the local newspapers inadvertently misspelled his name â€œDeMaggioâ€ (with an "e") and that misspelling, which was repeated often, appears on all of his Zeenut cards. The card has a heavy diagonal crease in the upper right portion of the card and evenly rounded corners. This is a very attractive and very rarely seen with-coupon-intact example of this extremely historic card dating from DiMaggio's earliest days in professional baseball. Reserve $1,000. Estimate $2,000/$4,000+. SOLD FOR $14,220