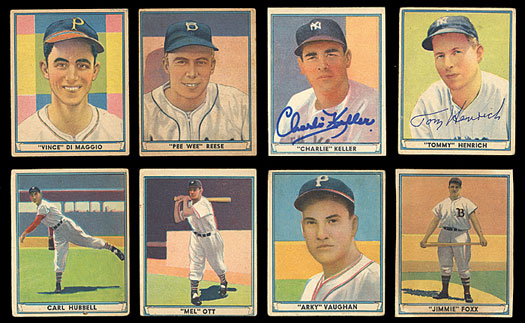 Complete set of 1941 Play Ball, in low grade, but still with great eye-appeal, from an old-time collector, and featuring a signed example of key card #71 Joe DiMaggio. This classic 72-card set includes many Hall of Famers and stars of the day. In addition to Joe DiMaggio (signed ["10"] in blue Sharpie, authentic card but miscut), highlights also include Ted Williams (Fr), Charlie Keller (signed "9" in blue Sharpie, Gd), Tom Henrich (signed "10" in blue ballpoint, Vg), and Lefty Gomez (signed "8" in blue Sharpie, Vg). Condition is overall Good, with a handful of Vg or slightly better cards (including #54 Reese rookie and 61 V. DiMaggio), and some cards in lesser condition (including a few trimmed). One of the great things about card collecting is that the most classic card sets can be collected in any condition, and on any budget. This set may be far from Mint, but it is a still a very pleasing and very collectable set of original 1941 Play Balls, which offers an outstanding value and a relatively affordable alternative to a higher-graded set of this popular and colorful prewar gum issue. Total: 72 cards. LOA from James Spence/JSA. Reserve $300. Estimate $500/$1,000. SOLD FOR $1,896