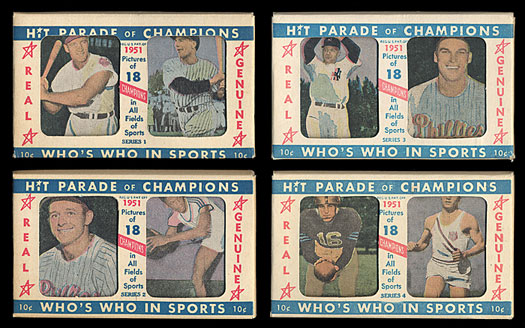 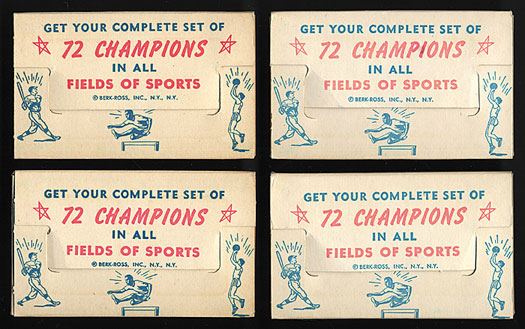 Complete set of thirty-six two-card panels (72 cards total) packaged in four unopened boxes as originally issued. Perfect Mint condition. The set consists of Joe DiMaggio, Stan Musial, Whitey Ford, Yogi Berra, Phil Rizzuto, Ben Hogan, Bob Cousy, Sugar Ray Robinson, Jake LaMotta, Jesse Owens and 62 other "Hit Parade of Champions!" All mint boxed sets of 1951 Berk Ross in the entire hobby originate from a single source: Bruce Yeko's Wholesale Cards. Yeko was one of the hobby's first full-time vintage-card dealers, and for many years these sets were offered in Wholesale Cards' fixed-price catalog for $19.95 per set. No one knows how many sets he originally had, but it was probably a few hundred. They were available well into the early 1970s, when Yeko finally ran out. This uncirculated set no doubt originates from Bruce Yeko's Wholesale Cards. Mint Berk Ross sets represent a tremendous value for collectors compared to other Mint cards of the era. Total: 72 cards. Reserve $400. Estimate $800/$1,200. SOLD FOR $1,422