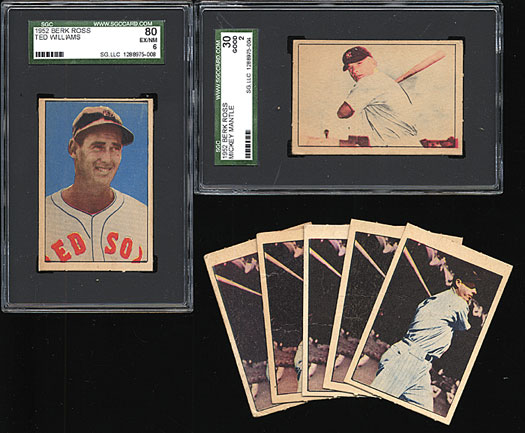 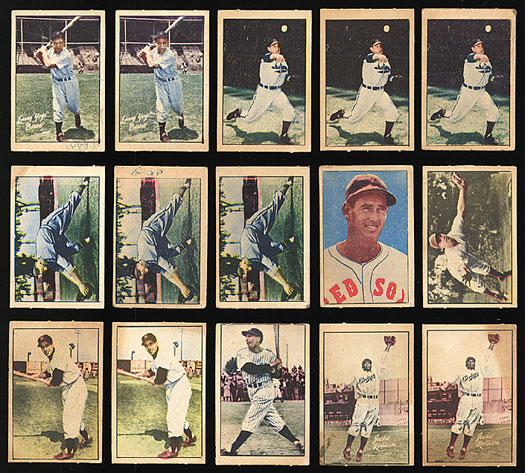 "Shoebox" collection of 101 assorted 1952 Berk Ross cards, highlighted by many key cards and Hall of Famers, including Mickey Mantle, five Joe DiMaggios, two Ted Williams, two Jackie Robinsons, three Stan Musials, and many more. This collection was recently discovered in an estate by our consignor. The cards were literally in a shoe box! (The entire find included 169 cards. The best example of each player was pulled out of the collection to assemble a near set, which is offered as a separate lot in the auction.) 1952 Berk Ross is a fascinating set, as it includes Joe DiMaggio's final traditional trading card as a player, and also Mickey Mantle in the same pose as his 1951 Bowman rookie card. The 1952 Berk Ross cards are similar in design to the 1951 Berk Ross card set, though slightly different in dimensions (they are larger and vertical in format) and the set was issued as individual cards instead of the perforated two-card panel design from the previous year. Two cards have been graded and encapsulated by SGC (both submitted by REA). Keys: two Berra (Fr and Pr), five Joe DiMaggio (two Vg, Gd, two Fr), three Doby (Ex-Mt, Ex, Vg), Doerr (Ex/Ex-Mt), three Feller (two Ex-Mt and Gd), Hodges (Gd-Vg), three Irvin (all Vg), Kell (Ex), two Lemon (Ex-Mt and Ex), Mantle (SGC GOOD 30), three Martin (all Gd), five Mize (Vg and four Gd), three Musial (Gd and two Fr), Reese (Vg), two Rizzuto/bunting (Vg and Gd), Rizzuto/swinging (Gd), two Jackie Robinson (both Gd), three Schoendienst (Vg-Ex, Vg, Gd), and two Ted Williams (SGC EX/NM 80 and Vg). The balance of the cards range from Gd to Vg-Ex (with a few slightly lesser). The 1952 Berk Ross series is among the most interesting and overlooked sets of the era. It is also far rarer than collectors realize. (There were never any 1952 sets available from Bruce Yeko's Wholesale Cards as is the case with the 1951 set.) Total: 101 cards. Reserve $500. Estimate $1,000+. SOLD FOR $2,252