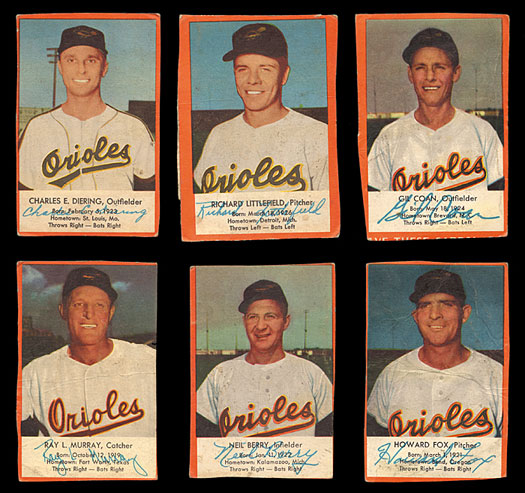 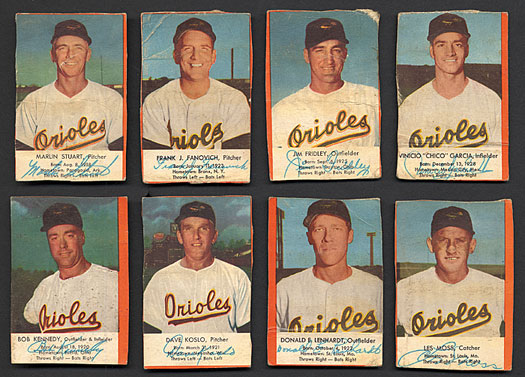 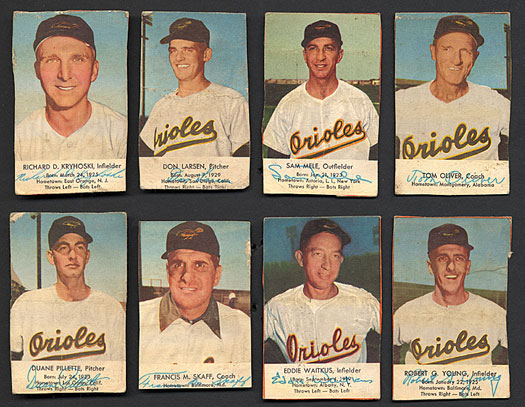 Presented is an extraordinary newly discovered collection of Esskay Hot Dog cards. Rarely offered near-complete set of 1954 Esskay Hot Dogs consisting of 30 different of the 34 cards in the set, missing only the following four cards for completion: Heard, Kokos, Newsome, and Turley. This is by far the largest group of 1954 Esskay cards that we have ever seen or offered. All Esskays are rare, but putting together a set is virtually impossible. With a remarkable thirty of the thirty-four known cards in the set represented here, this collection is very close. The regionally issued 1954 Esskay set features only Baltimore Orioles players. One two-card panel was issued with each pack of Esskay hot dogs. Their method of issue, significance to collectors as they feature the first roster of the new Baltimore franchise, and their legendary rarity have always made Esskays one of the most highly prized regional issues of the era. The reverse of each card is blank. Because of how they were issued, condition has always been a problem with Esskays in general. This is an extremely attractive near-complete set of thirty different cards. Technically the cards range from Pr to Vg, but as can easily be seen, this collection compares very favorably to most other surviving cards from the set, and several are particularly noteworthy in that they have orange borders that are usually not present. Most of the cards look substantially better than their technically accurate assigned grades. Condition composite: Four cards still have their orange borders intact: Coan, Diering, Fox, and Littlefield. Eleven cards have a portion of their orange borders intact: Berry, Fanovich, Fridley, Garcia, Kennedy, Koslo, Lenhardt, Moss, Murray, Stuart, and Wertz. Fifteen cards have their orange borders cut off: Blyzka, Brecheen, Coleman, Courtney, Dykes, Johnson, Kretlow, Kryhoski, Larsen, Mele, Oliver, Pillette, Skaff, Waitkus, and Young. This collection represents a very rare opportunity to acquire an extremely attractive near-complete complete set of this classic 1950s regional food issue. Total: 30 cards. Reserve $2,500. Estimate (open).
SOLD FOR $7,110