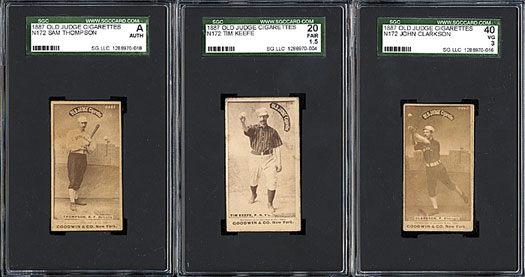 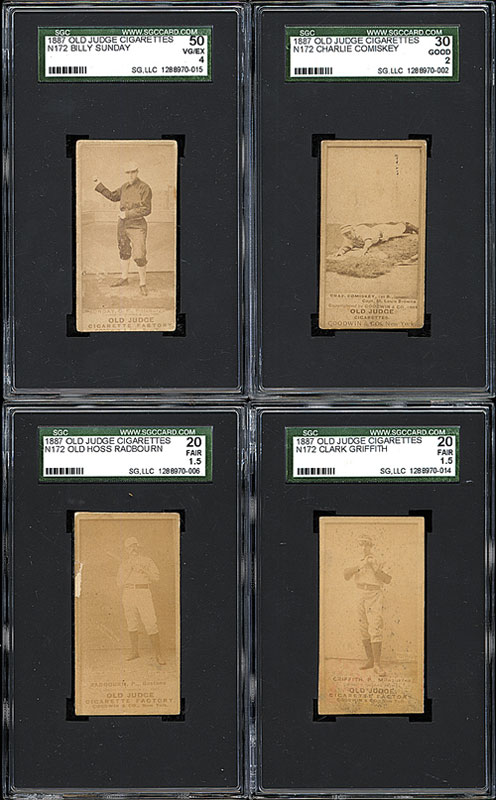 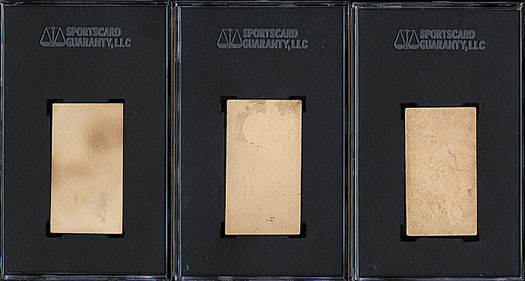 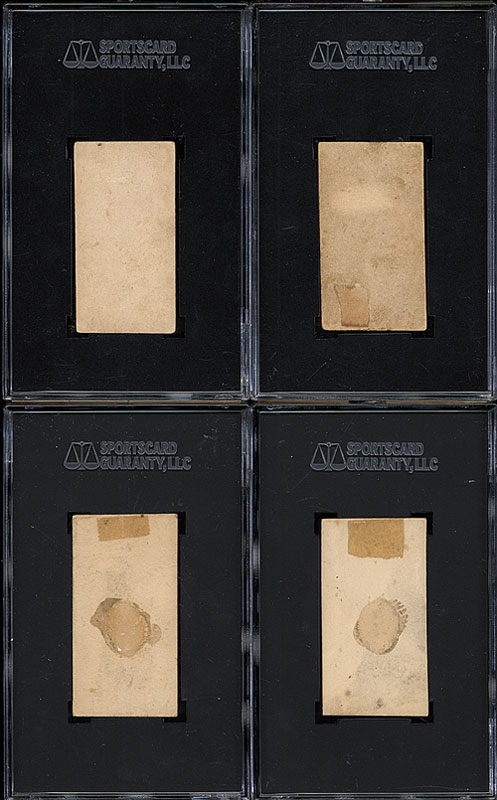 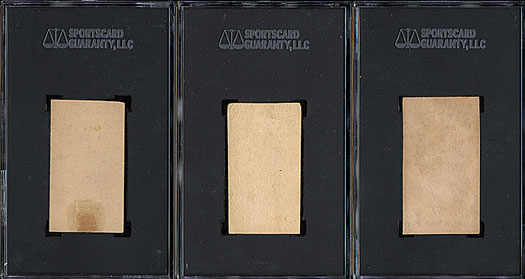 Collection of nine Hall of Famers plus legendary ballplayer-turned-evangelist Billy Sunday, for a total of ten cards from the N172 Old Judge series, each graded and encapsulated by SGC (all submitted by REA). This is part of a larger collection of N172 cards, which we have broken down into several smaller lots organized by condition. 1) #78-6 John Clarkson (VG 40). Outstanding image of Clarkson in front of an elaborate studio backdrop. The card displays even wear on the corners, purple ink mark on the bottom, and is centered towards the top left. The blank reverse has some light soiling, two light creases, and a purple ink mark. 2) #86-2 Charles Comiskey (GOOD 30). Great-looking, technically low-grade card. Excellent contrast. This card features a very unusual and striking sliding pose presented on a vertically designed card. The card has slightly rounded corners, black ink mark in the background, and no creases. The blank reverse has heavy dusting and a square mark (appears to be from stamp-hinge removal). 3) #149-8 Buck Ewing (Authentic, top border clipped). Superb photo contrast. The blank reverse has a stamp-hinge removal mark at the bottom. 4) #201-4 Clark Griffith (FAIR 20). The photograph is a little light, a characteristic which is common to many N172 cards (and in our experience, particularly the case with Griffith). This card only looks Fair. The front has some scattered areas of foxing. The blank reverse has a small piece of tape attached, as well as a glue mark and soiling. Griffith is among the most difficult to find of all N172 Hall of Famers. All six poses of Griffith feature him with Milwaukee and were issued in 1889. This is Griffith's rookie card. He signed his first pro contract in 1888 with Milwaukee of the Western League, and later jumped to the American Association, pitching for both St. Louis and Boston in 1891 before the league collapsed. Griffith was signed by Cap Anson for his NL Chicago Colts (later Cubs) in 1893. The "Old Fox" earned his nickname with his six-pitch arsenal, including the screwball (which he claimed to have invented). 5) #251-3 Tim Keefe (FAIR 20). Very clean and attractive example with an 1887 copyright date. Superb photo quality, no creases, surface chip in the lower left corner, and paper loss on the reverse. Nice-looking card. 6) #358-2 Jim O'Rourke (Authentic, back skinned). Clean both front and back, with a crystal-clear image and excellent contrast. 7) #377-3 "Old Hoss" Radbourn (FAIR 20). The photographic quality is weak on this card, a characteristic which is common to many N172 cards. There is a surface chip on the left border. The reverse has a small piece of tape and an area of glue residue. 8) #446-3 Billy Sunday (VG/EX 50). With a copyright date of 1888, the card was issued during Sunday's first season with Pittsburgh; up to that point, he had spent his entire Major League career as a backup outfielder with the powerhouse Chicago Nationals. It is interesting to note that Goodwin used a photograph of Sunday in his Chicago uniform, probably because a photo of him with Pittsburgh was not yet available, and airbrushed over the team name "Chicago" on his uniform. No creases, slightly rounded corners, and centered to the right. Some soiling and light abrasions on reverse. We grade this card Vg. 9) #456-1 Sam Thompson (Authentic, apparently has a slight trim, light glue stains on reverse). Outstanding photo of Thompson in front of an elaborate studio backdrop. Various minor condition problems but this is a nice card that at a glance has an Excellent appearance. 10) #478-3 John Ward (Authentic, apparently this card has a slight trim). Nice-looking card. No creases. Back abrasions suggest this card may have been removed from an album. Numbers referenced above are provided by the recently published comprehensive Old Judge book. This collection represents a tremendous opportunity to acquire a group of key Old Judge Hall of Famers and Billy Sunday at a fraction of what higher-graded examples would cost. Total: 10 cards. Reserve $1,000. Estimate $2,500+. SOLD FOR $5,333